I haven't blogged recently about cooking, as I often find that we are too quick to eat, and I end up not getting any photos. However, I can assure you that I have been doing plenty! Ive been experimenting with making my own curries with really great results. This "Very simple Lamb Rogan Josh" recipe was a real winner with the family, especially as it was accompanied by "Oven baked onion bhaji's" So simple, cheap and delicious I will never buy them again!! I had to use ordinary flour the first time I made them, and these were OK, but since, I have found Chick pea flour in an Asian supermarket (which was like an Aladdins cave!!!!). I also made a huge vat of this Chicken Byryani for Hubbys party and it went down a storm. The first time I made it, I used my own paste concoction - similar to the Rogan Josh one, but for his party, I used Pataks paste and it was lovely too. I used dried apricots instead of sultanas, and any leftovers can be served cold next day mixed with a dollop of mayonnaise to make a Coronation Chicken type dish - delish. I was desperate to try Nigel Slaters Noodle Soup, after seeing this on tv the other week ( I have a bit of a thing for Nigel Slater - and no idea why!! and his kitchen and garden are gorgeous too). I can tell you that this is now a firm favourite in the Heart Shaped household and its so simple and cheap top make. It makes a superb vegetarian dish, I added Spring onions , baby corn, green beans and mushrooms (I also added a real onion when making the paste as I have found with Indian cookery that this is slightly like adding water, but more flavour). Last night I added strips of leftover ham too. It is really filling and so so tasty. 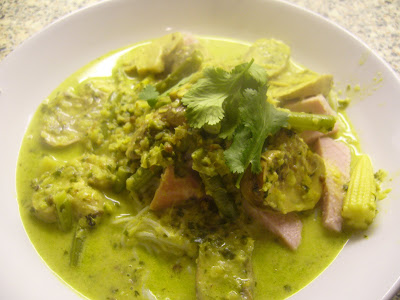 Give it a go

Hi
Great recipe tips and they all sound lovely. I love making curry's and will definitely be trying the onion bhajis you have posted about.
Tracy
x

'Ooooooo' that does look tasty and very quick and simple to make - thanks for the links.

You want to make jealous the "Joneses"!!! xxxxx

Guffaw, I had a terrible dream in which Nigel Slater kidnapped me and when Mr.Lane turned up shouting the odds he hid me under the stairs! What's that all about?
I will try your Lamb dish~ sounds brilliant,

Like you I love Nigel's way of cooking and have several of his books- the photography in them and on his website is wonderful! The noodle soup looks good and tasty:)

Not only are you brilliant at cookery, you arrange your food so nicely, too!!

Curries upsetMr. G's elderly stomach, so they are off the menu, alas, but I must watch Nigel, obviously for more than just cookery!!

Ok, you've made us jealous!
Can we come for dinner pleeeze x

Hi Diane! I just wanted to say "thank you" for being such a wonderful swap partner to Juanita, really many thanks from the bottom of the heart! xxxxxxxxx

Great recipes. I've copied them all and will definitely try them! Thanks so much!

Kissed by an Angel said...

Hi Diane, Thank you for your lovely comment!! I agree with you Lydia is nice, kind and gentle, a really lovely person!!
Those recipes look fantastic!! I'll try one or two - Mr Angel is not to keen on Indian food!!! Shame, because I love it!!!
xxxx

Looks well scrummy. Not such a good week with your plumber, Oh dear. Wonder if my builder will actually turn up!!

' that does look tasty and very quick and simple to make - thanks for the links.
data entry india