For hubby's biggy birthday, we both took the day off work, and after breakfast in a wonderful Italian cafe in Sheffield, we headed out to the Peak District for a nice bracing walk in Hathersage. As funds are extremely low - owing to the recent boiler crisis, we kept out of the shops, and headed through the woods and up the hill. 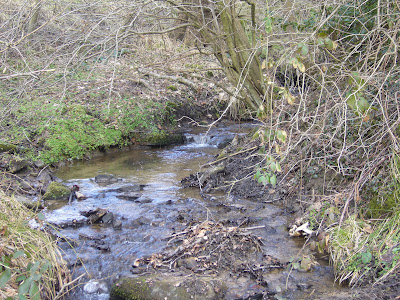 How utterly sweet was this little fella - I was still a bit wary of his horns though. 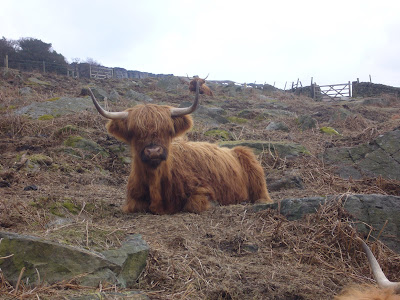 The views over Hathersage and beyond are truly beautiful. 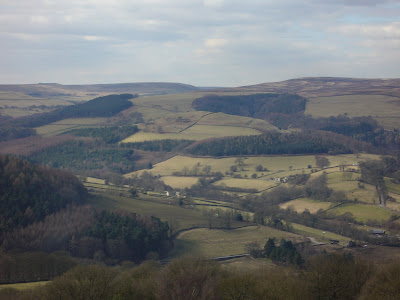 We headed up passed North Lees Hall - now houses 2 self catering apartments. It looks a fabulous place to stay. It is believed to be the inspiration for Mr Rochesters house in Jane Eyre. Charlotte Bronte stayed in the area a few times. 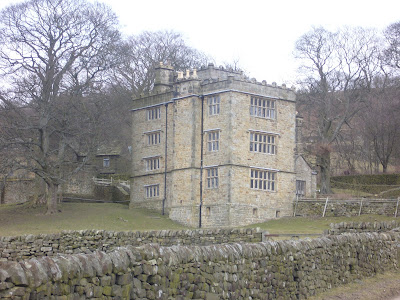 I thought that this looked a dodgy crossing for 2 old codgers with a combined age of 100 years!! but we made it. 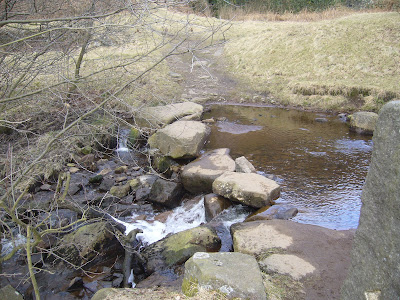 Its a bit steep for me, but hubby calls it a gentle slope!!!! 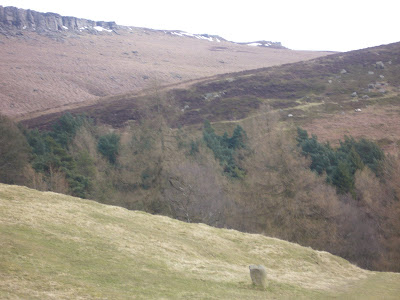 There is a fab crystal clear pond at the top. It gets full of frogs, but I inspected and found no evidence of frogs spawn. I reckon it will be later this year because of the extreme cold temperatures. 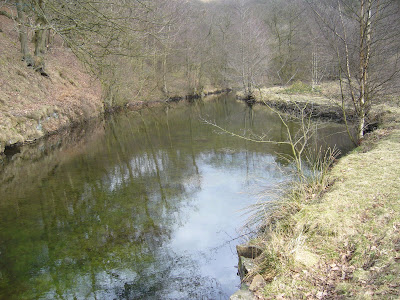 We followed the stream back down the hill. 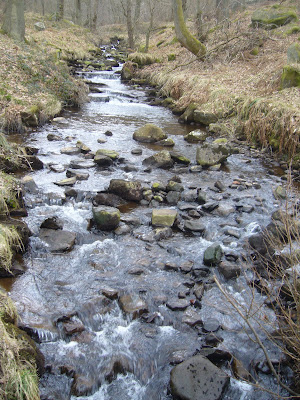 And we said a big "Thank You" to Evelyn. Hubby now wants to be a footpath inspector. 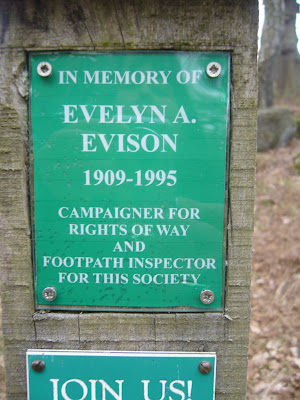 We found a cottage - I think estate agents would call it "ripe for renovation"! 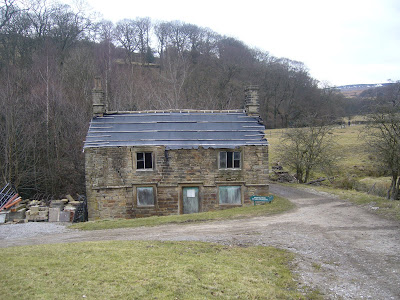 And I'll leave you with yet another film location. Can you remember seeing these rocks in a film over the last couple of years? Its a film I bet you have all seen. Answers in the comments box, and I'll let you know next time if you were right. 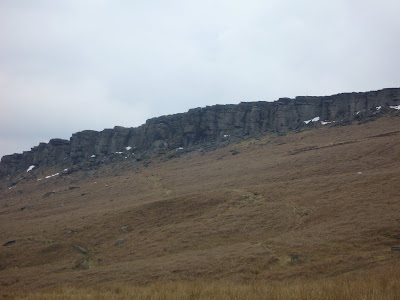 We then went home, and had a party with a few family and friends, got a bit drunk, nearly killed a few pensioners on the Wii fit board, ate too much food and had a real laugh. He had a great day bless him.

What a lovely walk and that cow is so gorgeous looking :-) Wii fit - I haven't been on by board since it told me I had the balance of an 80 year old - I mayu forgive it and return to it soon :-)

Boilers are so expensive aren't they? Looks like a wonderful day, great walk, good food and a party! Glad hubby had a great birthday:) I think the film was P&P with Keira K on those rocks?

More brilliant photos - love the one of the cow, you could frame it!

Anything to do with the Wii nearly kills me so I'll give the pensioners a pat on the back for surviving.

I don't recognise the rocks at all but I'm going for a vague guess of something period drama-like?!

What stunning images, it looks beautiful

I am glad he had a great birthday, it sounds like a lovely time was had by all. I'm another one who doesn't recognise the rocks........ However, that building is everything I would ever imagine Mr Rochester's house to look like..........

What lovely views! I live in the middle of the US. Round here there is beauty, but none of the history you see in your corner of the world. Looks like you all had a wonderful day. Just came upon your blog today, but I do believe I will return!

Beautiful views in your lovely area. As for the film, we don't know the answer, tell us soon won't you?!

Glad to hear Mr H/shaped enjoyed his special day!
Another lovely place to go for a walk, don't recognise the rocks!
Lisa x

Can't quite beat Hathersage can you? but no pics of Little John's grave? Mind you the cow made up for it, what a beauty!
Rosie x

So glad your hubby had a happy birthday. Lovely landscapes but I'm afraid I haven't the foggiest what film it is either! I'm not a lot of cop at at your quizzes, am I? ;o)

I know the rocks, but not the film! And I love that Highland cow - good thing he can't see anything under that hair, with those horns he could be a bit, well,upset maybe?? If I were there I'd have to keep the dog well away!!

That looks a really glorious walk. The cottage looks as it is being renovated already - with those stones etc. piled up by the side.

Sounds like you had such a good time! Beautiful photos x

Great photos, lovely views. Don't know where the rocks are, will be interested to find out!

Belated Happy Birthday to your DH! Great way to celebrate, the country around Hathersage is beautiful isn't it? Glad he (and you) had such a good day.

Wow it looks beautiful. I love woolly bulls as I call them.

Gosh, I've only been away a few days and you have posted lots! Beautiful photos!!!