A huge dose of perspective. 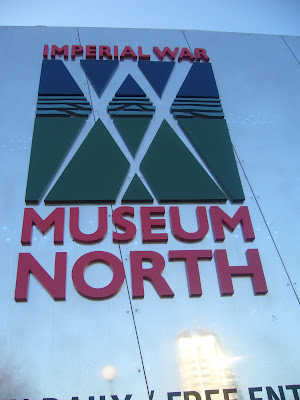 Well done to all of you who spotted that we were indeed at the most impressive Salford Quays, in the extremely sunny city of Manchester. And a big well done too if you recognised Audrey Roberts from Coronation Street (in the black leather jacket). Ive not watched any soaps since hubby and I got together - (I couldn't stand the constant moaning and tutting all way through!!) but both hubby and I recognised her - it must have been the hair!!

Hubby had always wanted to visit the Imperial War Museum of the North, so we drove over the Woodhead Pass to what we Yorkshire folk like to call the "wrong" side of the Pennines. It was far too dark in the museum to take decent photographs, but it is well worth the trip if you get chance. I don't know what it is with boys and war, but whilst hubby and the young man thought everything was exciting, I found the exhibits quite traumatic. They have lots of very personal possessions from people who were caught up in wars from the 1st World War to present day. When you read such poignant letters in a soldiers own handwriting, or see possessions that belonged to a nurse who was working in Hong Kong, and was captured and interred in Japanese prisoner of war camp for years, then the human toll seems enormous.
They had a special exhibition by Don McCullin - a photo journalist who spent his whole career photographing every war since 1960. I found every photograph harrowing and couldn't help but cry looking at the faces of innocent people - from babies to very old people - who are caught up in such unimaginable circumstances. I have never seen anything as moving. Apparently, he suffered a few breakdowns in his line of work and he realised that he was addicted to it. His work is truly a really important legacy to mankind.
Another thought that struck me, as I wandered from 1960 - the Berlin wall being erected overnight and the cold war, Biafra, Cambodia, Bangledesh, Vietnam, Northern Ireland, The Falklands, Bosnia, The Gulf etc etc etc - to present day, is that these are actually my years, the years I have been alive. Apart from making me feel really really old with all this history under my belt, it made me realise that I take peace in my life, and my freedom totally for granted when so many women my age have gone through so much.
As we watched a film where a lady my age told the story about a family in Bosnia who were made to leave their beautiful town, lovely home and everyone they knew because they were the wrong "race" - even though their families had lived there over 200 years. 2 years on, whilst they were safe and healthy, they still didn't know where they would end up. Unimaginable. It made my whinging about having to fork out £2500 unexpectedly for a new gas boiler, when the old one wasn't quite 4 years old pathetic. It certainly put things firmly in perspective for me and I count myself so lucky to feel so safe, sound and warm with my family around me.
Posted by Diane at Monday, March 08, 2010

You are so right.
G used to interview people who had come to this country and needed NI numbers to work and he heard some very harrowing life experiences that they had been through.
Lisa x

my mother worked in a military hospital and i did some voluntary work there when they were nursing soldiers back from the faulklands, it certainly opened my eyes. i have also heard many stories from my mother regarding her family surviving the london blitz (she was born during it).
your post is very moving and well writen, it really does make you think and stop to appreciate all the precious blessing we have.

The Imperial War Museum is somewhere I really want to go, mostly to see the what we used to eat exhibition, or whatever its called. I am sure I will find so many pictures of those caught up in the war very harrowing.

Thanks for this. I've only been to the IWM in London and I think I cried the whole time I was there. Now I'm going to have to see the Don McCullin exhibition. I've never forgotten his images of the Vietnam War which were the first of his photographs I'd seen. No wonder he's now focusing on landscapes.

I love the Imperial War Museum, it's brilliant.

These past 2 posts made me very excited because I'm officially going to be moving back to Manchester in a few months. I can't wait. I'll be on the lookout for Audrey!

Like you, Diane I always see the personal stories behind the 'conflict' ones and I found some of those exhibitions really moving when we visited - there is so much injustice in the world and I suppose it does put things into perspective and make us think about how lucky we are to live now in our part of the world:)

oops I was looking at the wrong person & to be fair I don't watch Corrie....I'm a Neighbours girl G'Day !

Sam & Dillon have got the most gorgous eyes deep pools of dark brown - quite sorrowful especially when they are akng for attention.