Grey Sunday mornings are made for museum visits. We decided to take a trip to Kelham Island as they have almost now fully recovered from the devastating floods which wiped them out in 2007.
Its brilliant to see all ages taking advantage of the river - but I bet it was cold! 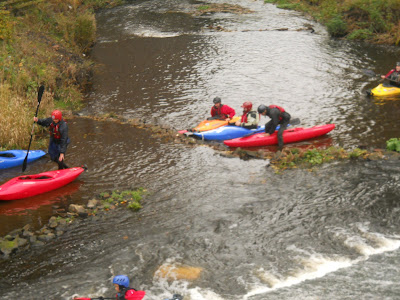 Kelham Island is a man made Island on the river Don, created so that the water could power the machinery. 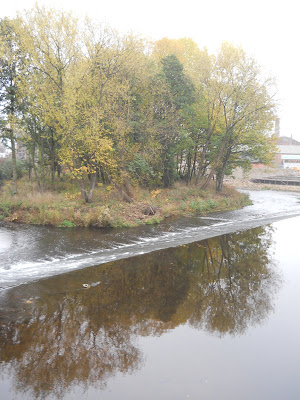 At one time this area was the hub of Industrial Sheffield. Not only did they make the steel, but they made everything you could possibly think of with it too. Cutlery, saws, files, steel plating for ships and planes, nuts, bolts, flanges (??) etc etc Now only a couple of these exist. All of the old buildings are gradually being converted to flats, or pulled down. 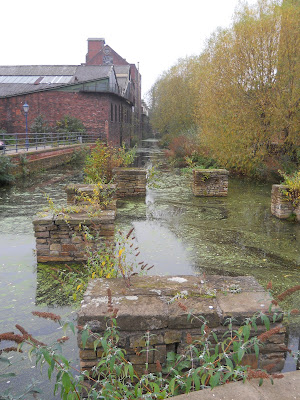 The museum itself is a fabulous little place to visit, and its always free in the school holidays. They have saved some of the HUGE relics from the past. 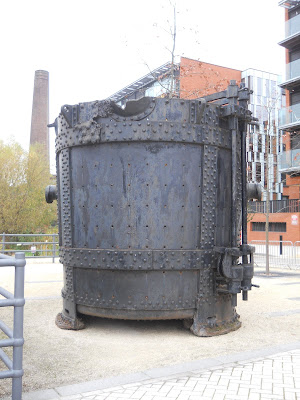 My favourite exhibit is the Bessemer Converter - I would have loved to have seen this big beast in action. 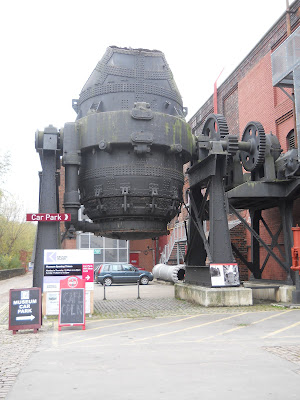 Most of the museum was destroyed in the flood, they have done a great job in getting it back - and improving it. 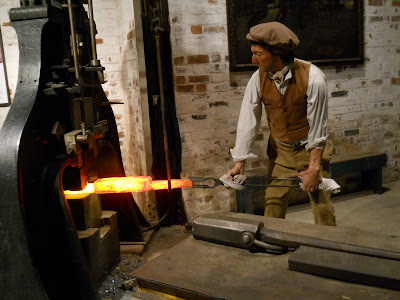 I loved the section about women in work in South Yorkshire. My mum didn't work when we were little, but I had friends who's mothers worked in the many factories that were around at the time. It must have been really hard work, and for a lot less pay than the men got. 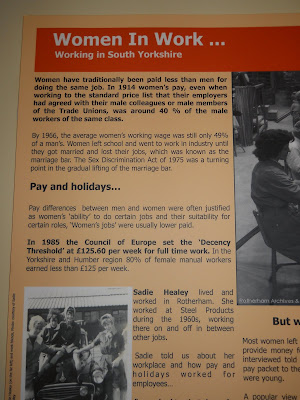 They have recreated a street where the Little Mesters would have worked. I can remember lots of streets like this in Sheffield up until the early 1980's. Only a couple still remain. 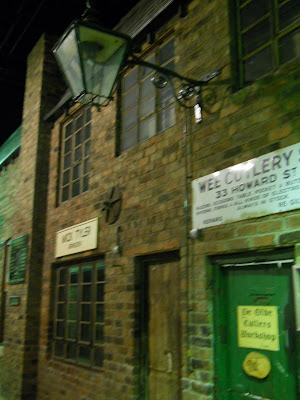 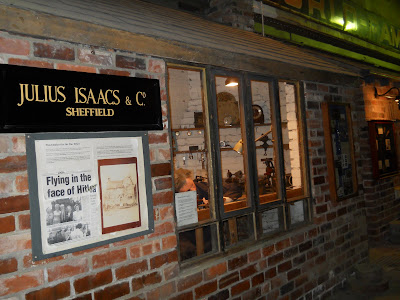 Another great exhibit is the massive old River Don Engine, which they fire up every couple of hours. Its wonderful that they still have this, and that it is in working order. The noise and the sense of power is overwhelming, its like watching an orchestra. We all wanted clap when it had finished. 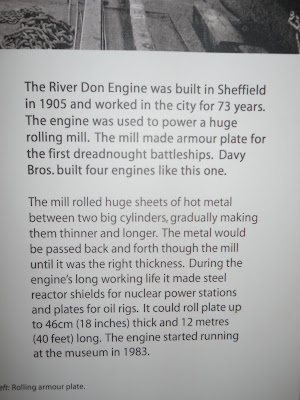 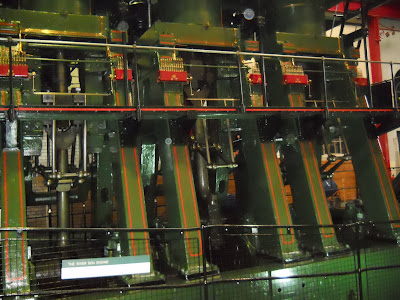 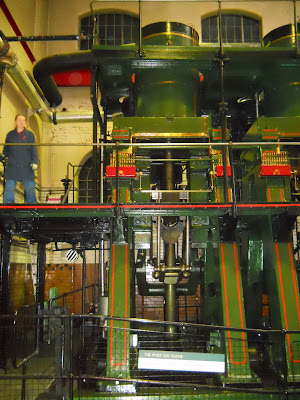 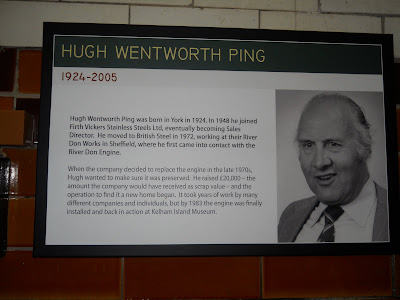 Now you know you are old when you can remember museum relics being used! When I was 18years old, I worked in the accounts office of a big engineering company in Sheffield. They manufactured their own steel, and made huge things, like dams and the Thames Barrier with it. I can remember peering into the melting shop and seeing equipment like this being used. 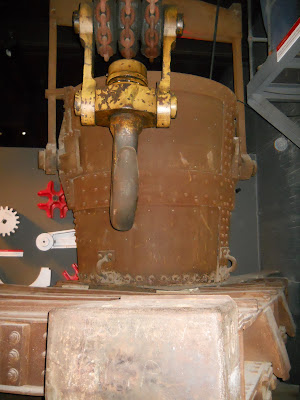 I also used to have to clock in and out every day! 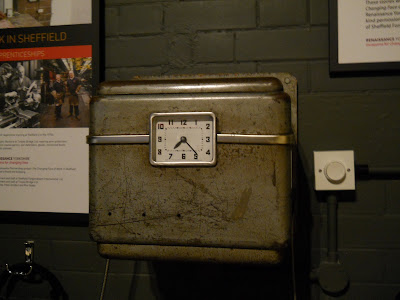 And I had the most amazing social life then too. The company owned and ran all of the sports fields around the area - of which there were lots and they were immaculately kept. They built a community hall and ran dances, an operatic society, amateur dramatics group etc from here. Day trips and weekends were regular features. There was always something going on - and something for everybody too. 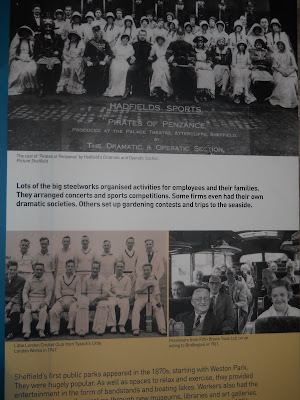 So its official, I am old enough to be put in a museum!
After our visit, we took a quick walk by the side of the river down into the City. We spotted a Kingfisher!! 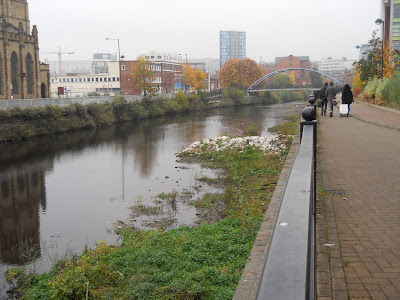 This is Lady's Bridge. When the river flooded, the bridge was submerged and remained in a dangerous condition for a while. 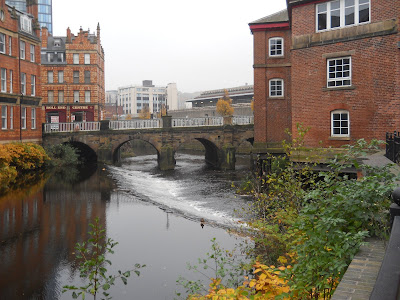 Sheffield was also a big brewing city too. We had several very large Breweries here - again all sadly gone (although several very good little micro breweries have now sprung up).
I used to hate shopping in Sheffield when I was little because I couldn't stand the smell of the brewers hops which seemed to hang like a fog over the city. 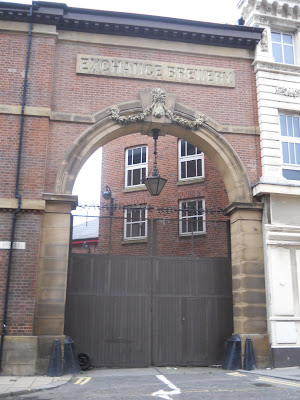 We had a great day out, and reflected on how the Governments of our lifetime - both Conservative and Labour have decimated our city.
Posted by Diane at Monday, November 01, 2010

What a great post, yes I am also definitely a museum piece! Fantastic photos and masses of info. Diane

Really interesting. Love those old relics. Thanks for showing us round Sheffield. x

another great catch up diane.....that thorsby park looks a real treat.....just seen the comment about you writing a book......i would read it, if i lived in your part of the world i would use your posts as days out guides, they are so good. hows the dancing queen getting on? am nudging youngest to look at sheffield hallam....any comments?

that made me laugh(the aunt and uncle thing, not the DQ news)sorry to hear she not settled in and enjoying the course.....we had the issue re the boyfriend last year....he was at nottingham and they saw each other practically every weekend, which raised all sorts of issues regarding studying, meeting people and not least of all the cost of train fares from york!! really hope she settles down, its still early days

Another interesting post. It's such an education reading your blog Diane.

What a fantastic post. You live in such a beautiful and interesting country, makes me want to visit again very soon. Hopefully I'll be there in a year and a half. :-)
Anne

Yes, I'm a museum piece too. That looks like a really great museum. The floods were really bad there I see.

Another museum piece here! I was sorry to hear that the museum at Kelham Island had been destroyed by floods. I remember visiting in the early 90s when I was on a museum diploma course from Leicester - we were taken up the M1 on a coach to visit for the day - it was fascinating. At least things can be restored at the museum which is more than the progressive damage to Sheffield's industries - indeed those of other places too - can be done. A lovely interesting post, Diane:)

Fascinating museum! I do love a bit of industrial archeology! I went round a steel works in Sheffield in about 1958 or 59 and I remember how huge and hot everything was. The breweries sprung up because all that heat meant the men had to drink a lot - that's the absolute truth.

And that makes me old enough to be in a museum, too!

Great post. This town has similarly witnessed the demise of the industry it was founded on.

awww...i really enjoyed this entry...you brought the place to life and it was fun to see it through your eyes - all aspects and there now and then...I often look at battersea power station and marvel over what it might have been like in its heyday...the smoke, the sounds, the sheer size of it complete and intact and the floods of men going to work in it...that is why it is my favourite city building...it captures my imagination...bit like a roman ruin does. Sad that all this industry has gone when it was once such a deeply rooted part of life...I'm sure people wouldn't miss the hardship and smoke etc but still...it is our heritage and you can't help feeling nostalgia or something like that for what has come and gone good or bad...xxx