Look what I found in (as Michael McIntyre would say) the "man" drawer. Its a piece of musical history. 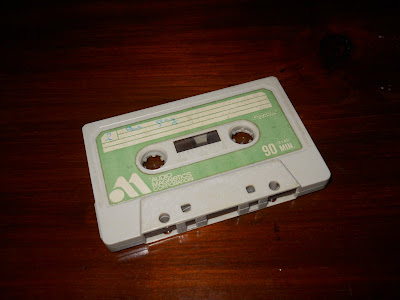 For Christmas 1973 saw Santa bringing the 13 year old Diane a cassette tape recorder - can you remember the type? It had a microphone attached to it and to record anything, you stood the microphone in front of the TV or Radio. The sound quality was as you can imagine - interesting. I thought it was great. I couldn't afford to buy records, but now I could tape them straight from the charts (new charts came out on Tuesdays, but the charts played in its entirety on Sundays!). The only annoying thing was that you got Diddy David Hamilton, or Mike Rieds voice on too. Anyway, fast forward to the Eurovision song contest 1974. I thought it would be great to record it ALL! And so, I tried to make my family sit in complete silence for the whole of the evening - not easy. There is a great bit on the tape when my Mum (who's knitting needles can be heard clicking all way through) forgets I am taping and decides to put the kettle on - asking loudly if Dad wants a cuppa, only to be met by sssshhhhhhhhhhhhhhhhhhhhhh. She kicks off big style - and I halt the taping until she has stopped ranting. When taping resumes, she can be heard making the said cuppa in the kitchen (noisily as she has a mardy on!) but peace is almost restored. We can be heard singing along quietly to Olivia Newton John - Long live Love - and the winner that year was of course Abba with Waterloo. Its a priceless piece of nostalgia

Hi Diane , great memories !!
I had an ITT cassette recorder and used to tape the charts . I used to stop it between songs to cut out the talking , then forget to start it again.
I also remember taping "the good life" one time and listening to it over and over , background noises included !
Having a givaway over at mine if you want to join in :0)
Jacquie x

Oh now that stirs memories :) I remember getting my first cassette player/recorder and using my sisters radio to record the charts. Lots of hissing and background noises. Of course it had to be done so we could learn the words to all the songs :)

Christmas 1973 saw me cooking my first ever Christmas lunch while coping with a 6 month old baby - tape recorders and pop songs didn't figure very largely in my life at that point:) A few years later I did tape all of Christmas morning unknown to anyone else. I still play it occasionally and it's lovely to still be able to hear my mum and dad's voices even thought they both died many years ago. Incidentally it would be nice to meet up with you and go to Wentworth as you suggested maybe in Spring. I've been so busy recently that I'm nearly meeting myself coming back hence lack of posts and comments.

Hi Diane, enjoyed your post - v funny. I remember doing very similar things back in the day. I've still got all my cassette tapes. I very rarely play them but I can't bear to throw them away. How barmy is that?

Lovely memories again Diane. I too had an orange tap machine. I don't ever remeber taping from the tele, Idon't think my family would have been as obliging as yours!!
Sue

Brilliant! I remember trying to tape adverts off the TV and to stop the tape when the product was being said so we could make up a quiz to use at Christmas!
Lisa x

I remember tapes well! They often seem to come to the end of one side, though, in the middle of a favourite song being recorded! We moved house a year ago and I threw all the tapes out :(

I remember recording music and radio plays on a music centre that had a record deck and tape recorder. I don't think my family would have kept as quiet as yours - although we all had to keep quiet when my Dad was listening to the football results on a Saturday evening! That was before tapes were heard of though! I once met Diddy David Hamilton (too long an explanation for here)- he was diddy too, even in his built up shoes:)

Utterly brilliant Diane :0)
You must have nearly wet yourself listening to over again - what great memories.
Jill x

Wonderful! Loved this post. I could just imagine your mum clattering around in the kitchen with her "mardy" on. A long time since I heard the word "mardy"! :O)))))

Such a funny nostaligic post. Mr FF had one of those reel to reel recorders when I first met him, complete with music including household happenings. I can remember in the 60s writing down the top 10 in a notebook every week, fortunately I don't still have it.

Brilliant. I remember going into my bedroom and taping the charts on Sunday. I used to get really excited counting down the Top 10. I feel quite deprived though, I never got a microphone with my recorder!!

Priceless ! I did EXACTLY the same !!! Oh Those charts !
I taped our whole Christmas dinner conversation when I got that cassette recorder & my Auntie Viv was hilarious ! Best friend Natasha & I would sing ino it & dissolve into stitches.... I have that cassette some where ..!

I exercise every week to the sound blurting out from one of those tapes with a friend & you can hear her talking on it too & we laugh every time, you must find more hidden tresures

What a fantastic nostalgic find.