I need to check my memory which will involve a visit to the Brown Bear Pub in Sheffield, because they have a feature on Old Sheffield Theatres in the corridor on the way to the ladies loo and I'm sure it states that at one time there were more than 200 dotted all over the city. I know when I read my mums old diaries from when she was a teenager, she used to go to the theatre almost every week - often twice a week. Of course the impact of televsion caused many of them to close down and many in the city were pulled down unfortunately. Some turned into cinema's, a lot of them turned into Bingo halls.

The Adelphi was built in the 1920's and sits in Attercliffe which was then a very heavily industrialised but also highly populated are of the city. These days, Attercliffe is home to some fantastic sporting venues (thanks to the World Student Games a few years ago) and also - a bit further down the road - it turns into the seedy part of town with its "Private Shops" and some very dodgy clubs for men who want to swap their wives! (Actually, I often think it would be great to swap hubby for a "wife" - I could do with a shopper, cleaner, cook, gardener, taxi driver, washer, ironer etc!) 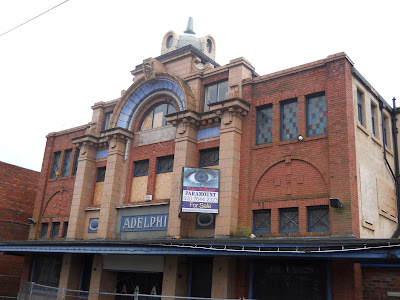 I think the Adelphi was a bar of some description latterly, but now its empty, unloved and for sale (for about £200,00). Its a very striking building when you drive past it, and I wish someone would buy it and restore it to its former glory (like they did with the Lyceum which went from Theatre to Bingo Hall and then back to Theatre again). But I suspect they won't as its not in the right place. 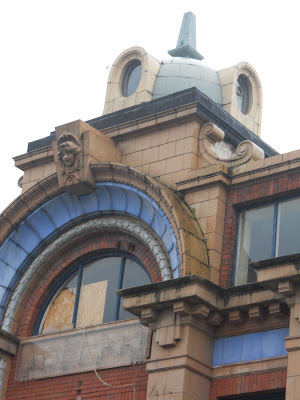 You can see some old photos of the Attercliffe and the Adelphi if you scroll down on this site.
Posted by Diane at Wednesday, January 19, 2011

Always a shame when this kind of thing happens.

It's a pity that the Adelphi is empty and unused, let's hope someone buys it and restores it so that it can be used again. It's a listed building so hopefully won't be demolished. I looked at the Sheffield Theatres site, very interesting, I had no idea there had been a theatre on Charles St/Pinstone St, it was rather a splendid buildung too, what a shame it's gone. This was a really interesting post

It is so sad these old buildings are just left especially when they are so beautiful. Restoration is expensive and unless there is a good reason for doing it I can understand, sad though it is. It would make a striking home but maybe it is not in a residential area. Also it would have to be someone who had a bottomless pocket I guess :( Diane

What a great piece of history. I dont know Sheffield really, but even in my small market town we had 3 Theatres (non of which survived!). I think its such a shame that we are losing so many of these incredible buildings and am always glad to hear when one is saved. A bit like our High Streets really...a thing of the past!

Same story here, once so many and now just a tiny one from the 1960's still operating as a theatre. The council recently tried to buy back the beautiful building that once was the main theatre in the town centre (now a night club) but were unsuccessful. It was the theatre I made my debut, age three!

I went to the Adelphi when I was little I think to see Snow White with my Aunty and then to Bingo with my nan. My Aunty has written a book about life in Attercliffe called Once Around the Lump. Her name is Ann Sapcote (you can order it from the library I think). There is a photo of me in it as a baby and pictures of my aunts and uncles and grandparents and my lovely dad. He is the very handsome one called Brian. Oh I could go on and on. My Dad was born on the cliffe his house was almost where the entrance to Institute of Sport is now. Coincidentally my very first proper job was at Nat West on the cliffe which is still there now only a stones throw from where my Dad and his family spent many happy years. Ahh. Love reading your blog. Thank you.

It's such a shame when lovely buildings are left to decay. It's the same situation with many things with the advance of technology. The things which used to be enjoyed get taken over by gadgets.

Just dropped by to say Hello having come over from Baggins Bottom (or whatever!)
A lovely blog to read, thank you.

Such a handsome building. Thanks for showing us Diane. At least it is listed so hopefully someone will save it and restore it to it's former glory. x

It would be oerfect if someonedid buy it to restore it, a very beautiful building.
Lisa x

Lovely shots, I always like to look at old Sheffield cinemas!

Hi Diane - ive put a button on my blog now - i'm feeling proud of myself as I am not too hot with computers. Hope you like the book - I wasn't trying to plug it just thought you might find it interesting - wonder if you will spot me as a baby - Aunty Ann did get my name wrong - she mixed me up with another cousin - so my name is not in print. Boo.

One day I will post about the time I was in the museum in Sheffield and the book was on the shelf and I announced to my children that I would tell at least one person in the shop that I was in the book etc. They were so embarrassed. I loved it - pay back time.

By the way am I posting this in the right place - is this what you do - im such beginner i'm not sure.

We often drive past this on the way home from Meadowhall/the cinema and admire how pretty this building really is! It is a shame it is in such a sorry state, if only it could be picked up and moved somewhere nicer!
The shops and naughty clubs in that area always make me laugh, especially La Chambre ("for liberated couples"!!).

Have you read the book "What's Tha Up To? Memories of an Attercliffe Bobby".... we sell it at work, it is so so interesting, I really recommend it!

What a wonderful building I've enjoyed your post and looking at the theatre site. I remember years ago coming to Sheffield to see a play - can't remember what theatre it was - it seemed old then. I'm sure it was before the crucible was built. The play was called A Day in the Death of Joe Egg - I'll have the programme in my collection I must look it out and see which theatre it was:)

I've found the programme - it was for Sheffield Playhouse, A Day in the Death of Joe Egg, performance Wed 25th March 1970 with Nigel Hawthorne as 'Bri'- inside is an advert for a special appearance of Joyce Grenfell in aid of the New Sheffield Theatre - the Crucible? I also have the programme for an opening performance at the Crucible called 'Fanfare' in three parts - children of the old sheffield playhouse, followed by Swan Song with Ian McKellen and Edward Petherbridge, then Douglas Campbell's Music Hall with the City of Sheffield Brass Band and a vintage Morris - I remember it all very clearly:)

the adelphi is on vicarage rd and all my family lived on there, which was handy as we could visit everyone in one go on saturday afternoon! auntie dot was manageress there for donkeys years and met and married doorman len. if you look at the top of the adelphi theres a figure of a head. aunty told us youngsters she had sat on top of it. years later we found it to be true as it was on the ground when being built!