On New Years Day the dancing queen had to work - much to her extreme disgust, and to be fair she said that the whole shopping centre was empty all day - more staff than shoppers. Hubby and I took the opportunity (as we were up at such a ridiculously early time) to leave the car in Meadowhell car park and walk down by the side of the Industrial part of the river Don and into the city. It was a very mizzly day, and if we had gone home, we would have just sat watching rubbish TV all day. This was a much better option. 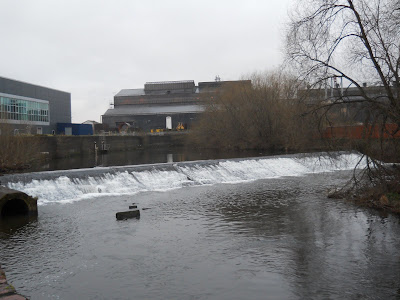 Whilst Sheffields industry started out right at the other side of the city, it ended up here on the east side of the city where it sprawled out, employing thousands of men and women until the 1980's when the decline started.
The river Don from Meadowhall down into Sheffield is not a pretty river but I find it fascinating. There are lots of information boards with amazing facts along the way. Did you know that there are lots of fig tree's along this stretch of river? Apparently the seeds set themselves in the river because along the way, warm water was dispersed from the steel works into the Don. 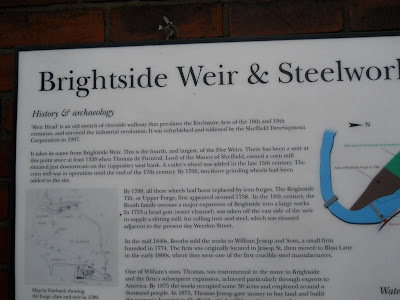 We were shown how the river's course had been changed by the industry and also shown where other tributaries joined the river. 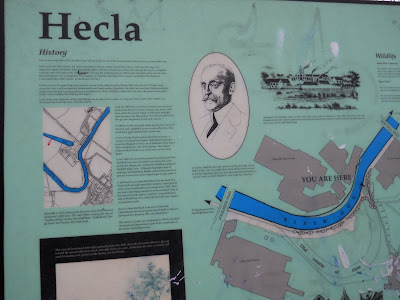 Some of the really old buildings remain - with a change of purpose. We recently watched a re run of the Victorian Farm which showed how bricks were painstakingly made in Victorian times. We marvelled at how many of these bricks are still in use.
One thing that the river provides is a corridor of wonderful wildlife through a part of the city where there would otherwise be none. We saw Cormorants, Kingfishers, some fab looking ducks (which I need to check out), Herons, Rabbits, a big fat brown rat (EEEEKKKK). The river - once very heavily polluted by industry, now boasts many species of fish and crayfish. 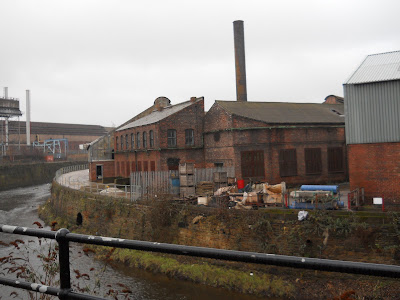 We've done this walk many times, and never noticed this fascinating bridge - even though we have walked across it! 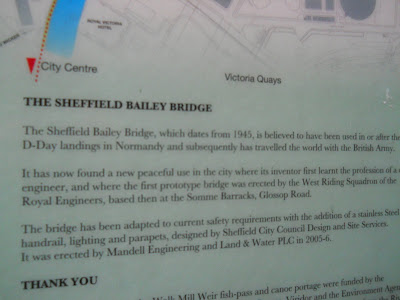 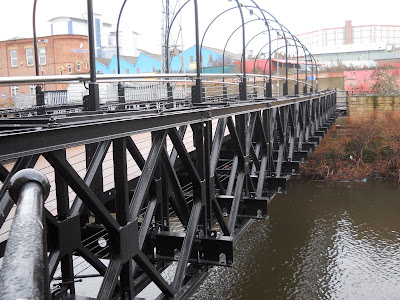 We walked back via the canal so that we got a good "round" walk. Along our way, we noticed lots of these blue plaques that we hadn't seen before either. They tell of the history of this area. If you have ever been to Sheffield Arena, you may have noticed the pub across is called "The Noose and Gibbet" This plaque tells why. 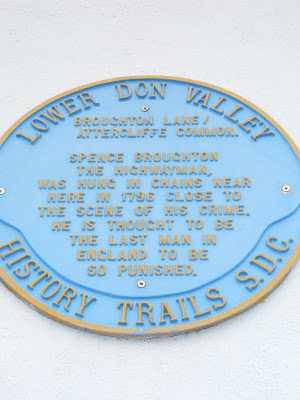 The weather never did clear up, so I'm glad we got out when we did. I was determined to make the most of my precious time off work by walking as much as possible this week, but my stinking cold and the foul weather conspired against me somewhat.
Posted by Diane at Monday, January 03, 2011

This walk has got to go on my list of things to do this year. It looks so interesting and I'd love to see a kingfisher, in 30 years I've only ever seen three on Oldhay Brook.

What an interesting post! Dave and I like to go out in Sheffield, but we haven't been for over a year as hotels and petrol make it very expensive. Next time we go, I'll ensure we plan time for some exploring!

Lots of interesting bits here and educational as well. Great photos. Hope you are feeling better.Diane

Fascinating! May the new year be a most happy one for you. Love Helen, Darcy and Bingley xx

I've travelled along that way by coach several times recently and often thought it looked an interesting area to explore.

Just wondering - have you tried geocaching? If not, then check out www.geocaching.com - it's a sort of international treasure hunt :) I just looked up part of your walk on the site and there are quite a few caches around there.

We've used geocaching to find lots of lovely walks both near home and further afield. Most are set by locals and take you to spots you may not have considered. My favourite was when we were on holiday in the Lake District and a geocache took us to a stone circle that we wouldn't have come across otherwise - it was a spectacular location, surrounded by snow-capped peaks.

Hello firstly Betty LOVED her card and showed it off to visitors. Secondly loved your walk its one that I have never done and my late Dad did it lots. He was born and bred in Attercliffe and loved the fact that nature had returned. My uncle says there are otters living in the river near Lady's Bridge he works near there and has seen them. As for the pub I did know that bit as I walked up and down Broughton Lane as a small child and my mum and dad used to tell me about it. Think the pub used to be called the Hangman. Ah happy days.

Thanks for that lovely walk, I too have never seen a kingfisher, would love to though x

I could never quite believe that the Hillsborough flood, surged all the way from loxley down the don valley all the way to rotherham!!!!

Had a chuckle at your description of Meadowhall. Have really enjoyed reading your post - isn't it amazing how much wildlife you can see in the city? We saw kingfishers up in our city centre on the canal as it runs through the park towards the steam museum at Etruria. What an interesting but gruesome story about the highwayman! Like you I've been struggling with a rotten cold which just doesn't seem to want to go away. Hope you feel better soon

Hope you're feeling better. We can never get right through the festive season without someone starting with something. Sounds like you had a wonderful walk and found out lots of interesting facts. I loved Victorian Farm, I'm in the middle of watching Edwardian Farm now and I'm really enjoying it.

i love the little journeys you take us on x

It's amazing what's on our own doorsteps. Thanks for sharing another piece of yours.
Lisa x

Sorry to hear that you have a cold. Hope you feel better soon. Blogging helps you see things in a different light, like the bridge. Interesting post. Why did Sheffield stop growing in the eighties?

I've just seen a otter in the river Don in Strathdon. It was just amazing, entertaining us for ages.