You may have heard the sketch that Michael Mcintyre does, where he explains that in Yorkshire, we don't use the word "the". He's right in as much as "the" is only implied, but in his sketch he uses "T" instead of "the". This is wrong. We say "T" instead of "to the". So "to the Asda" becomes "T' Asda" but "The Lion, The Witch and the Wardrobe" becomes "Lion, Witch, n wardrobe". I just thought I'd put you straight.

On Saturday morning, I went into Barnsley. Locally Barnsley is knows as "Tarn" (Yorkshire for "town"). I had a specific reason for going (which I will tell you about tomorrow), but I thought I would show you some of the buildings that caught my eye. 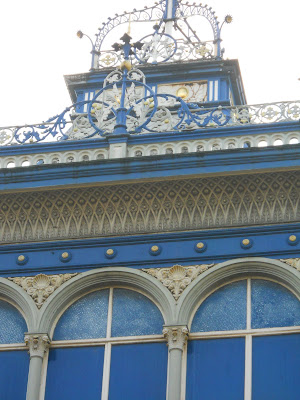 The town itself has suffered greatly over the past few years like all northern towns have. Some very modern dodgy town planning in the 1970's resulted in a lot of the town now looking a bit grim. These buildings were all part of the shops and offices that used to be owned by Barnsley British Co-orperative Society (I can still remember my Mums "divi" number!!!). When I was little, this is where you bought your school uniforms and special clothing for the "Sunday School Anniversary". Posh weddings were held in its Centenary Rooms, and its cafe was a quite extravagant affair with waitress service too. 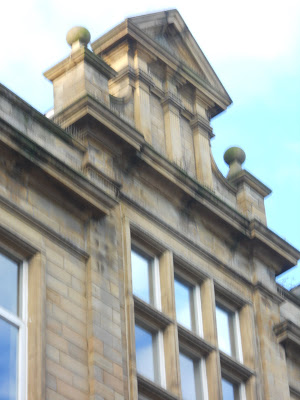 If you walk past them now they look grim at street level as most are now empty or turned into bars, 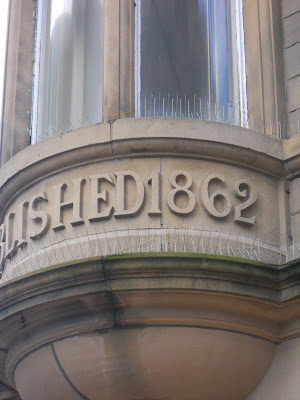 but looking up, the buildings are magnificent. 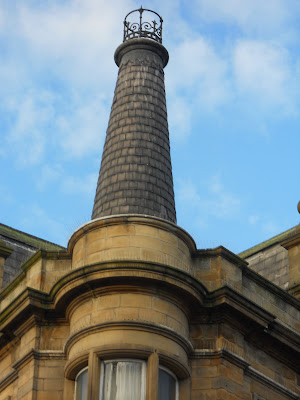 Its a shame that town planning has not valued these amazing buildings, choosing to knock down many and build soulless glass and steel buildings instead. 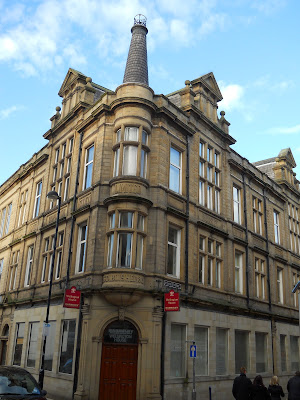 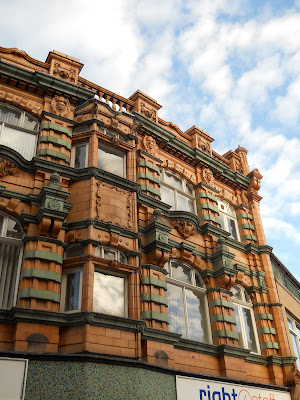 One thing that Barnsley does have LOTS of is charity shops - honestly about 20! I found these new colourful tea towels for 50p which will brighten up my kitchen. 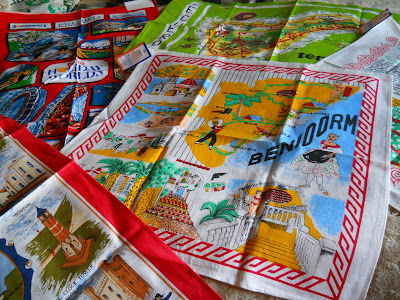 I'll show you where I went, and tell you a quite remarkable story tomorrow.
Posted by Diane at Sunday, January 09, 2011

And we wouldn't say going T Asda, we'd say off T Asda, lol. It's like a whole new language is Yorkshire. I don't think I've ever been to Barnsley, I certainly can't remember ever going. It's such a shame that old buildings aren't looked after the way they should be.

Lovely t-towels, looking forward to hearing about where you've been tomorrow!

I enjoyed t'tour of tarn and I really liked t't towels. I am allowed to say these things because though I come from t'east riding my husband's family come from Sheffield, he still says give it me instead of give me it.

In Stoke they'd be 'goin go Asda'! or 'goin up 'anley, duck'! Here too many old buildings have been lost. I love regional speech and accents. Look forward to hearing more of your visit:)

Love the description of 'yorkshire' speak!!!
It really annoys me when people don't get how We speak here. My kids laughed at me for years for calling my Brother and sisters etc 'our' Marc and 'our' Jo etc...but when We moved to Yorkshire they realised everyone here does it!
I've noticed the really lovely old buildings in tarn too...have you seen the plaque outside 'Blah Bar' telling a tale of an incident at what was the market opposite in the 16th century?
Love the tea towels too!!
Love Em xxxx

PS have I ever mentioned We hold our 'Stitch 'n' Bitch' group at cannon Hall Garden centre cafe if you ever fancy joining us.

I think it's amazing how many people don't look up and admire the old buildings while there out shopping or whatever. Wolverhampton is a very grim city at eye level, but there are some splendid buildings if you look up! My local town has some lovely old buildings too that are easy to miss if you don't look! I was thinking this afternoon of doing a very similar post as I walked up the main street in Wolves, but I didn't have time to stop to take photos today.

hmm, so are you on t,internet like Peter Kaye says!!! Down here instead of 'where are you' they say 'where're you to' .But i guess you already know that!!!

As you know I'm one for looking up, you miss so much otherwise. I've only been to Yorkshire once, about 15 years ago, and remember driving through Barnsley and it was very grim. Hopefully things have improved since.

Ooooh the complexities of regional speech :0)

In the bit of Yorkshire I came from ( Haworth) we never said tarn for town because a tarn was a different thing altogether, a small lake / boggy area on the moor .

You're so right, it is necessary to look up to see the best sights when it comes to buildings.
I'm in suspense about tomorrow!
Lisa x

Thanks for the update on the Yorkshire language. I think I would have a problem up there, I would struggle to understand and no one would understand my South African accent :))

It is so sad when old buidings are brought down. There are so many that could be restored and incorporated into something a bit newer. Diane

That's a lot of charity shops! - when's the next train?!

Wow, these are some amazing old buildings and I can almost hear them whisper their tales of the past.

As do your fabulous old photos in the previous post - how precious to have them!

Of course you know I think these are just the most charming posts...where you give me a glimpse! Funny, I have been composing a post "in my head" lately about the funny way we say things here on the Delmarva Peninsula...well, others, of course, not ME! hahaha

Loved your post and look forward to your reason for the visit!

many thanks for the lesson part 1. in how to speak yorkshire and thank you for the lovely informative tour too.

Yes, a lot of our heritage was destroyed by the "modernisers" back in the 60's.
Two magnificent buildings demolished in Doncaster were the Guildhall and the old Public Library. Now a pretty soulless town centre - until you look up and see what it used to be like.
Carol xx