Ive been suffering with yet another bad cold this week. I haven't had a cold for years, then I go and get 2 stonkers in 1 month!! I have struggled into work, but I have collapsed on the sofa and slept once home - so that's why you have got to see so many of my photos from last week. Here's one last look at some of my walk around the city.
Its true that parts of the city are a bit run down, and the rejuvenation programme that was all set to launch just as the current economic crisis hit has had to be shelved for a while, but if you go looking for the good things, there is so much to see.
I think in the 60's and 70's, we looked too much towards America and flattened a lot of our heritage in favour of building big and new. Certainly the huge American style shopping mall on the outskirts took a lot of trade out of the heart of the then bustling city. But I think that most of us realise now that the European way, preserving and adapting our heritage buildings is far more aesthetically pleasing.

The old "Wedding Cake" registry office and council building was pulled down a few years ago - I didnt ever think it was very pretty, but I suppose if you were married there you might be sad to see it go. I think that the old Town Hall is an amazing building - as many northern town halls are. 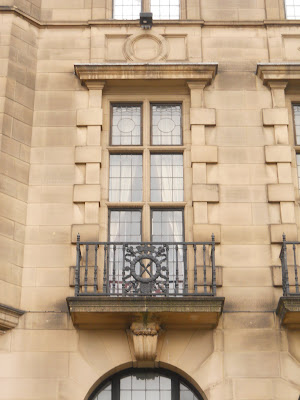 Once again, clever town planners managed to mix old and new when they built the spectacular Winter Garden and stuck the Millennium Galleries on the side too. 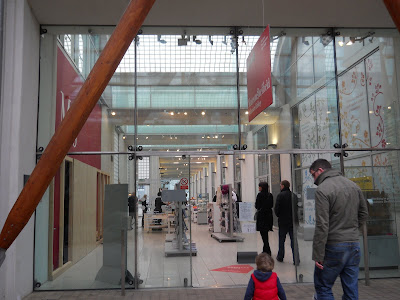 Many of the old buildings have old symbols on them. My daughter thinks its like the Davinci code! 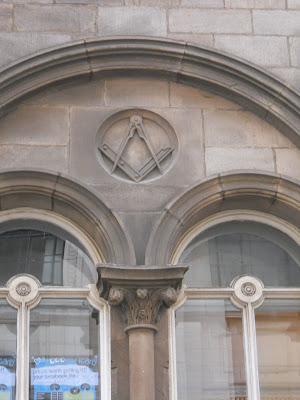 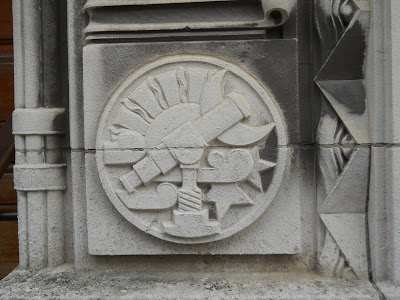 And I love the young Egyptian on top of the Library/Art Gallery (in fact I love all of this building - inside and out!) 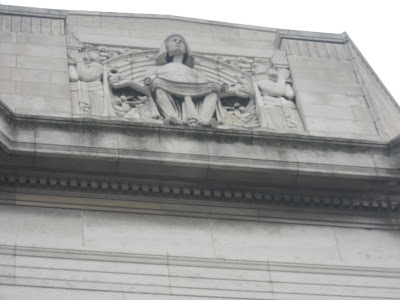 Rowan, I'm waiting for you to tell me what all these symbols mean! 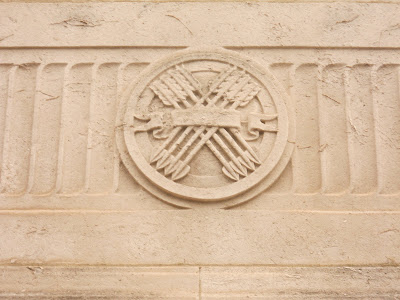 The City Hall is a wonderful building too. It is spectacular from the front, and the back, but I loved these pretty balconies on the plainer sides too. 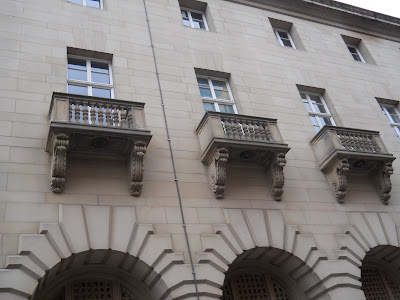 The recently revamped Leopold Square (that no one knew existed until it was revealed!) was once the main school in the city. The doorways all have really ornate stone carvings over them. The square has restaurants and "nicer" bars around the edge of it. Its a bit disappointing that most of them are "chains" (once again, the American touch I suppose, although locals kicked off big style when "Hooters" applied for a place and they were sent packing!) 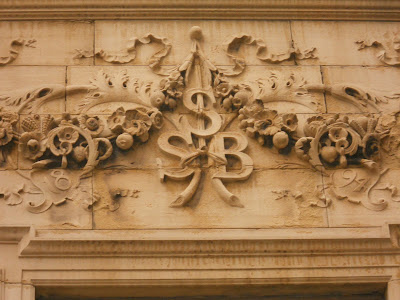 And around the Cathedral, you get a real mix of old and new buildings. I think this is where you can stand and see the evidence that the Blitz had on the city. It would be lovely to step back and see what the City looked like before, but at least they rescued many like this. 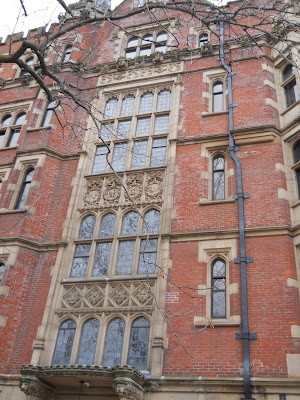 I hope you enjoyed my saunter around Sheffield at the weekend. I can't understand why folk flock to Meadowhall (Shopping Mall) on Sundays. The city shops are open and very quiet - a joy to wander around! (and that's from a non shopper!). No queues for changing rooms, a huge TK MAXX and a great wodge of culture and history to feed your soul at the same time!
Posted by Diane at Friday, January 28, 2011

Those stone carvings are amazing, aren't they? You're turning into the new Pevsner, Diane! Hope you get rid of your cold soon. Abby x

I love your walks and tours Diane. Thanks for sharing all these wonderful buildings with us, I love a bit of architecture. x

Shopping malls are soulless by comparison. I love all the carvings, especially the Egyptian one. Hope you feel better for the weekend. There's lots of bugs flying around just now, my hubby is on his second cold this year too.

Thank you yet again for sharing your wonderings! I, too, have a stinking cold and it's getting me down. Oh well. I hope you feel better very soon. BW. xx

So sorry that you are not feeling well. I just hope Nigel does not get it again!!
Fantastic photos, the symbols are so interesting. Diane

Sorry to hear you've got another cold, same thing happened to me, just when one goes another arrived!
Hope you feel better soon and have a good weekend.
Lisa x

what a delightful tour....I think it calls for tea and cake now...the only thing that seems to keep out the cold!!

So sorry to hear you've had another cold such a nuisance - hope you feel better soon:) Great photos of the buildings - I think the set square and compass emblem is for architects but is also associated with the freemasons. Like the one with sun, moon and telescope. Re the bombs in sheffield - an attendant at one of the museums where I worked in the 70s was injured in one of the raids - he lost a leg - he had a barber's shop and was a fire warden when he was injured. Long gone now I'm afraid:)

Shopping malls are so attractive for people everywhere..I always get immediately sick the few times I visit one..yuck!
Please get better soon for showing us other lovely places in your neighbourhood!
P.S. I loved your idea of makeover in your previous post..you should become a politician!
xxxxx

The square and compasses are the tools of the architect (and have a strong connection with Freemasonry). The telescope represnts astronomy and there are seven other carvings which represent the nine academic disciplines. The carving above the Library is an Egyptian scribe who represents Knowledge. The eight crossed arrows are part of the coat of arms of Sheffield.
I've always loved the old school building in Leopold Square especially the entrances marked Girls and Boys:) I can remember at my primary school that the boys and girls had seperate playgrounds!
I don't know about the carving from the school but would guess that SSB stands for either Sheffield School Board or Sheffield Board School - the order of the words makes a big difference to the meaning! I may very well be wrong anyway:)

I'm really enjoying the blog posts about your area - I had a boyfriend whose granny was from Sheffield and all I know of it was that he described it as 'very green' and he'd thought it was very hilly as a little kid (he lived in Lincolnshire at that point). Nice to 'see' the place he talked about!

The set-square and compasses symbol is the one most often associated with the masons, that much I know :-).

Thanks for this post, I enjoyed the walk!
Sorry you have a cold, could it be an allergy rather than a cold do you think? I hope you soon feel better and have a great weekend!

Hope your cold gets better soon Diane. Have you ever been inside the Town Hall. K and I were once invited to the Town Hall to a Buffet because he had been in Sheffield 10K and raised money for charity. It was amazing didnt get any pictures though. Dave Bassett old Sheffield United Manager sat next to me and K was most jealous (he is a Blade). I got my work permit to work in the Castle Market from an office in the old school in Leopold Square. Thanks for the photo's though you are showing me things I have never noticed before. Meadowhall - i hate it and only go if forced. Been up Eccy Road and Sharrowvale Road with friends today which I much prefer. Have a good weekend.

Such beautiful buildings! Thank you for sharing. Hope you are soon feeling much better!!!

I'm not too sure everyone realises it. Here there are more and more small independent shops closing in the city centres and more and more typically American style malls still mushrooming. I hate this new way of life and avoid them like the plague. These are lovely buildings but please keep the neighbourhood butchers, bakers, fishmongers, grocers alive and kicking! Sorry... I got carried away... Hope you feel better soon.

There were some bad decisions made in this town in the 60's and 70's in the name of development. I think I'm going to have to follow your example and get out with my camera to see what's left!

Hi Diane, loved your tour, I too take great interest in buildings around town. I just had a thought, you didn't take a pic of the old gas building, opposite the swimming baths, fantastic statues on there. I haven't been down there for a while, gosh I hope they haven't knocked it down! I hate Meadowhell!
Rosie xx

Hope you feel better soon Diane.
You ought to write a book about everything you know about Sheffield and the other photo tours you do.

Say to read you are not feeling well again, get well soon! xx

I've never been to Sheffeild so it's been amazing seeing all your pics this week. Hope that you're soon feeling significantly better. All the best.

That was so interesting, Sheffield seems to offer such a lot of culture and history. I particularly love the carving with the floral/fruit/veg swag and I think it's wonderful that Rowan is able to add a bit more background. Isn't blogging special?

I've really enjoyed your tours of Sheffield, you have a fantastic eye for spotting interesting and beautiful features which most people would walk past and miss. Hope you feel better soon x

I've always loved architecture. In fact Violet and I were admiring quite a number of beautiful buildings in Birmingham only yesterday before visiting the Musuem/art gallery.