You never know how the things you do can impact on total strangers.
One day in August 2004, I was surfing the net for the website for our local RSPCA. Google found me this thing called a "blog" - something I had not heard of before. The blog had featured Sheffield RSPCA as the family in the blog had just acquired a dog. I was intrigued by this online diary of a family who lived near to me and shared similar interests, so I followed it for a while, and then went on to discover other brilliant biographical blogs through Dan's blog. I discovered that people wrote blogs on many different topics and was thrilled when I discovered craft blogs.
I started my first blog as a way for my family to keep in touch. My aunts, uncles and cousins are spread worldwide and we had lost touch with each other. I created a blog that we could all contribute to, and years later we are all a bigger part of each others lives once more - which I love.
I then decided to start a public blog that I could use as a diary. I never realised that this would lead to me meeting so many wonderful people that I now consider beautiful friends. Blogging added a totally new dimension to my life at a time when I knew I needed something else, but didn't quite know what. And it really is all thanks to that chance finding of Dan's blog.
After I had been to the Pub Scrawl, I noticed a few posts on Facebook by Dan saying he had attended, so I took the opportunity to send him a message and say "Thank You" for the inspiration. I think he was a bit taken aback as he had no idea he had done anything! 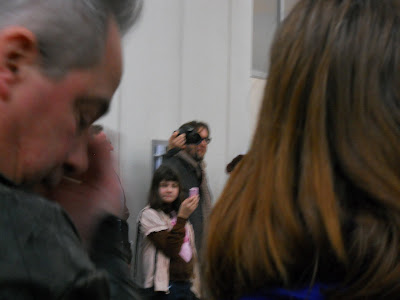 At the Millennium galleries on Sunday, I spotted Dan shooting some photographs - he also has a photography company called Dan Shot Me. So I popped over to say "Hi" and thank him for changing a strangers life for the better - without even knowing it.
Thank you Dan.
Posted by Diane at Tuesday, February 14, 2012

When I got divorced 12 years ago I moved to the beach. It was supposed to be temporary, so I made no effort to make any friends here in my small, isolated town. I still have no friends here, and don't really know anyone at all (unless the people at the post office count).

I rarely leave my house, other than to take a bus to go grocery shopping once a week.

Virtually everyone who has come into (and some have passed out of) my life in the last 12 years, has been because of this little screen where I spend countless hours, communicating with the outside world. I have been blessed with some deep and lasting friendships which have been formed and nurtured, here at this keyboard.

It's funny how things turn out. I can't remember when I first discovered blogs, but I was reading them long before I started one of my own.

What a shot! I was looking to find out more about crochet, clicked on a link on Moneysavingexpert, found Attic24 and a whole world of craft and friendship opened up.
Happy Valentine's Day.
Carol xx

Funny how things work out. It's great you got to say thank you to the person who started it all off for you.
Bloggy friends rule!
Lisa x

I'd just got my 1st allotment and was trawling the 'net for garden stuff, came across a site for allotment gardeners, then one had a thing called a 'Blog' to visit...and the rest as they say is history!

Now, who's gonna tell blogger off for getting rid of the followers button????

Nice posting D, blogging has also opened up a very wide world for me. It's GREAT to get comments from around the world from people who are enthralled that they can 'take a virtual walk' with me and Sue. I intend to blog as long as I can walk :-)

What a super story. I remember you leaving a comment on a post I wrote about Cromford with no link so that must have been before you started your blog. I found my first blog when I was trying to find out about traditions of finals at Oxford University for a short story I was writing for a creative writing class. I found one by a young woman who was blogging about her time at St Anne's College there. I started mine a few months later - nearly 7 years ago now. Doesn't time fly when you are having fun:)

We've to be very thankful to Dan for getting to know you then!!!
xxxxxxx

I think it's cool you have a blog. I never met anyone who was from England before, so I think it's rather fascinating to meet someone from England. You're a cool lady, I love the photos you put on here, very beautiful and I love how you talk about what's going on in your life. And plus, arts and crafts are something I enjoy too. Love the blog, it's awesome!!!!

What a nice story! And so fun for you to meet Dan in person. Blogging is such a joy! I'm glad I got into it a bit, and I just adore the wonderful people I've met. I'd also like to thank Dan for inspiring you, as your blog is one of my favorites to read. :)

cheers to Dan for the inspiration then otherwise we wouldn't have had your wonderful 'diary'....and really good it is Diane.....thanks for the invitation for coffee but this weekend it cannot be....really short visit as sister wants to househunt in derbyshire!...next time fingers crossed.....but if a mad women approaches you in sheffield in the next 48 hours it will prob be me!!!

As one of your long-lost cousins, I'm glad you found Dan's blog. I must admit I only blog our family blog and yours. So there is still a big blog world out there for me to explore. I remember me thinking it weird that you would write things for total strangers to read, but that is a thing of the past! Here's to the bloggy future! xx

I started my Blog after chatting to my friend who writes beautiful stories at his Blog Snapper & the Griffin. I remember being so excited when I got my first comment. I started it to blog about getting hens as I thought " Who would want to read about me ?" Now the hens have gone but the Blog remains & like you have made some wonderful friends.
Lovely that you met Dan. I like seeing a part of the country which I have never visited here on your Blog so thank you ! xx

(I like the idea for the little plastic bulls thanks !)

You're up for an award. Check out my blog and pass it on :D