I recently reconnected with a long lost school friend via a chance meeting with her lovely Mum in my local village hall. I gave her my email address to pass onto my school pal, and within a couple of days, I had received a lovely long email from her detailing what she was up to and generally catching up on the last 30 years (I last saw her early in 1982!!). We exchanged a few emails, arranged to meet up when she ventures north to see her parents, added each other as friends on facebook, and then she mentioned that her sister had written a novel which I might like as she has based it on the area that she grew up in - Hoyland Common and also Wentworth. The book is called Netherwood by Jane Sanderson. 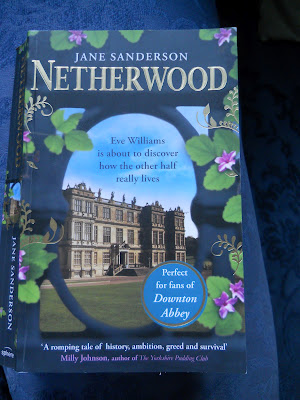 I really loved it and can't wait for the second book in the series (which is out in September). I don't want to give the plot away, but it is the tale of a big house who's owners discover coal in seams beneath their land - like the Fitzwilliams of Wentworth Estate did, and the folk that live in mining villages that spring up around it. Whilst it is a novel, a lot of the names of the people, the roads that they live on etc are very familiar to me, and the story of a mining tragedy is so very familiar too, as I was brought up in a mining village. You can buy the book in Waterstones and from Amazon. I hope they turn it into a Sunday evening TV series - I could even audition to be an extra!! Jane, if you read this, you MUST insist that I get a part - write it into the terms and conditions!
It made me really think about how my female relatives coped loosing the breadwinner of the family back in the days when there were no state benefits, and no jobs for widows to do - other than take in washing. I think that both my great grandmothers lost their husbands young, and both re-married. In a lot of instances, this would have been the only way to stay out of the workhouse, as the rent on a miners tied cottage would still have had to be paid.
The man that my great grandma Ottway married after her husbands death was a hard drinking bachelor called Jerry. She died herself not many years after marrying him, leaving my dear grandma - only about 13 years old - to take care of her brothers and sisters, and her step father - Jerry. "T'owd Jer" as he was known to us all, lived to be a grand 94 years old - I remember him well as he lived with my grandparents for the rest of his life. My grandad did not get on with him at all, but he put up with living with him for almost all his married life. He did once suggest putting him in an old peoples home, but the response he got from grandma is unprintable! T'owd Jer was a cross between Steptoe and Compo (from last of the summer wine). Up to the end, he would dress every day in his suit and tootle off along the road to the pub at lunch time, and then after a pint or two, would amble back to sit in his wooden chair. Like most men back then, he never lifted a finger to help in the house, and so it really was a blessing to him that he had married my widowed great grandmother. I loved him to bits - my mum says that he was on his last legs until I was born, but my birth seemed to revive him! When he was ill in bed near the end of his life (I would have been about 10 years old), I used to read the newspaper to him and play the radio for him. He died whilst we were away on our weeks holiday to Blackpool, and I felt sure he would have got better by the time we got home.
Posted by Diane at Wednesday, February 29, 2012

Thanks for that, just reserved it from the library.

I think you could write your own book, I love hearing your true stories. We have a mining family background, Stoke was'nt all about pottery, we even used to have steel industry. some would say we used to have a pottery industry but thats a story in itself.

Diane, thanks for your post (and for the benefit of anyone else, I am the old school friend!).

Jane's book was initially inspired by our grandma, Nellie, who was widowed when her husband was killed in a mining accident in the early 40's and who was a great cook - we used to go to her for school dinners (except Mondays which was wash day...). We both have very fond memories of her as a grandmother but times were tough for her in the early days and she certainly put my Dad through hell at times! Other than her situation, Netherwood is nothing like Nellie's story and indeed is set several decades earlier, but many of the places and names are indeed familiar and my Dad provided lots of first hand information about the mining community. I'm glad you enjoyed the book and yes, lets lobby for 9.00 slot on Sunday evening and extras parts!

How nice to catch up with someone from your past, it's nice to hear your story's.

Sounds like the kind of book I would really enjoy. I wonder if we can get it over here. I'll have to try Amazon UK.It's a bit like my book Robin Lythe's Tale, being based on Flamborough and all the actual locations, names and customs being preserved. I enjoy your posts.

I'm guessing this was the book you mentioned last week? Looks wonderful! How lovely to meet up with a friend from the past too. I love your childhood memories both my grandmas were 'in service' one in Nottingham and one in Leicester and my aunt millie was married from her 'in sevice' job which was for the son and his wife of Jesse & Florence Boot founders of the chemists - she used to tell wonderful tales about here time there:)

My grandmother was only 23 and already had 3 young children when her husband was killed in WW1.
She made ends meet by taking in washing, which must have been awful in a tiny cottage with no inside "facilities", water coming from the well and just one coal fire in the living room.
We just have no idea how lucky we are these days.

It sounds like a book I would enjoy, I'll have to look out for it. There's lots of mining villages around us. How nice to meet up with an old school friend, you'll have lots to catch up on.

diane the book sounds interesting I'll get Ray to look it it for me, when are you going to write your book

We had a copy of that come into the charity shop yesterday! I nearly bought it, wish I had now! Will keep an eye for it though for sure.
What lovely memories you have of your great grandad, it's very sobering to think of the lives our relatives did and could have had in such recent history. I'm sorry he passed away when you were on your holiday though, that must have been so very difficult.
Lisa x

Hi Diane - Jane Sanderson here. What a star you are....thanks so much for giving my book such a lovely mention, and I hope to see a small spike in sales in the South Yorkshire region! I loved reading your own reminiscences too - certainly Netherwood has sparked off a few trips down memory lane in our family. As Jackie says further up the thread, my memories of our Grandma Nellie Sanderson got me started with the book, and I plundered all our Dad's recollections about the collieries, the characters he knew and the conditions they endured in the pits. I'm so glad you enjoyed Netherwood. Thanks again for your support.
Jane xx

This was a book that came up a lot when I was looking for a book that people who liked Downton Abbey. I kept going back to it but I got a non fiction one in the end. Maybe I'll go back to it!

It's not clear if the old man you were so fond of was your grandma's step father or dad? You say her mum had been married before and then mention that your grandma was 13 when her mother died, but you don't say if she was the child of that marriage or the previous one. It's just that I suppose it is even more touching if he was her step dad as she obviously loved him but either way a lovely story.

I shall have to buy the book as I come from a Welsh mining town and my Father was a coal hewer and my Mother was in service. I have a very dear friend who is from Yorkshire and when we first got together we couldn't believe the similarities in our upbringing, even to the Whitsun Walks from Church to Chapel.

Hello Diane, it was good to see you the other week in Thorpe Hesley. I go there once a month for reflexology, just in case you were curious. Anyway, what a great blog you have, and I'm so glad you enjoyed Netherwood. I think its great,but I think Ravenscliffe is even better. Jackie and the girls are coming this evening, and she's promised to explain all about blogs! This is actually the second comment I've made; don't know what happened to the other. Possibly because I was having difficulty deciphering the two words, just to prove that I'm not a robot.
ps; Anne; Jackie and Jane's mum

IDK why, but I was laughing at your comment. Made me laugh. I thought he was alot cuter when he was younger, in his Faces days. But he has gotten older over the years, :D. But, for some reason, I love his music. It's pretty unusual that someone like me, 21 year old college girl, listens to him. But I listen to alot of the old stuff, and strangely enough, most of the musicians I listen to end up being from England, idk why.