It's a bit lively outside by Joyce Holliday

Last week hubby and I went to see the play "It's A Bit Lively Outside" which is based on a book written by a local lady Joyce Holliday.  Joyce had gathered stories of the Sheffield Blitz from friends and relatives and the play tells the story of those two terrible nights through these real lives.  It is a marvellous play - hilarious and tragic in equal measures.  Some of the dialogue was very thought provoking.  Whilst every one agreed the war was terrible, some of the characters were loving the fact that they were in full employment, and had plenty of money, for the first time in years - a fact that I had never even thought about before.  Sheffield was bombed on the 12th and 15th December - some time after other city's and as they waited day after  day for the inevitable, the talk changed from fear and intrepidation to indignation that Hitler didn't seem to consider the city worth bombing! 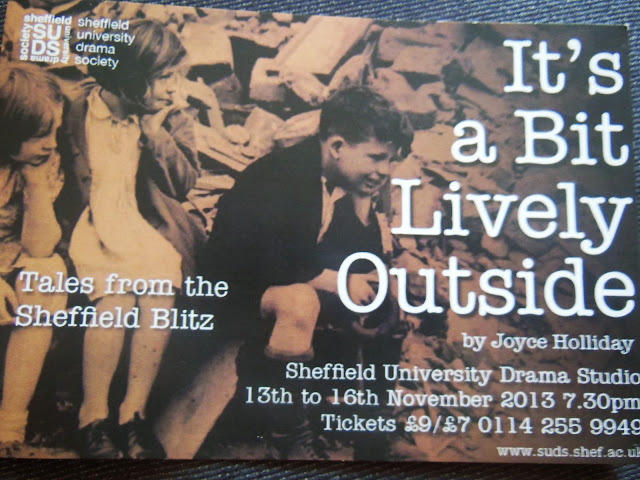 By the time of the first nights bombing, we had gotten to know our characters quite well and were keen for them to get into the air raid shelters.  It was quite hard watching the 15 year old girl deciding not to get into the shelter, but continue on her way to meet her boyfriend to go to the pictures (without her parents knowing!!).  And the bravery of the bus driver and his clippy (conductress) who defied company policy and continue driving the bus so that they could get all the steel workers back to their families.  The shock when they left the shelters was very poignant - not only to see bodies in the street, but also see that well known buildings and local landmarks were no longer there.  It really made me think.  We all know many local stories from the blitz, but I have never stopped to imagine what it must have felt like to experience the war so close up - bombs falling onto your home - in your own street.  One of the characters said that she felt that she was in shock for a long time afterwards, but carried on working and looking after her family as normal.  She said she had never spoken about it afterwards either.
It was the second time I had seen the play - I saw it back in the early 1980's before.  Hubby really enjoyed it too.
Posted by Diane at Wednesday, November 20, 2013

I bet a few hankies were needed to get through that play.
It sounds really good entertainment and something to get you thinking too.
Lisa x

Both sets of my Grandparents were bombed-out and lost everything except the clothes they were stood in. Hazard of living in Southwark, one of the heaviest bombed boroughs of London.
I used to ask my Nan about the time and although she told me she was a little reluctant to.
If you want to read some grim realities I can highly recommend London 1945 by Maureen Waller. Although it is obviously about London rather than Sheffield it is a fascinating read.