Many disasters happened in the coal mines of South Yorkshire over the years, but perhaps the worst was The Huskar Mine Disaster.

The mine was in the village of Silkstone and the story of the disaster can be found in the church and church yard. 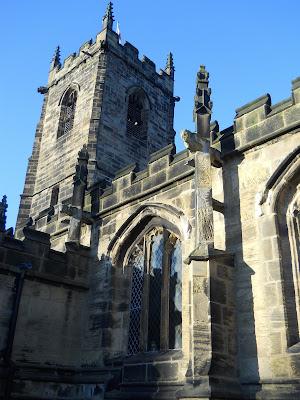 Whilst on our way around the church, we noticed that several of the church's current congregation have been immortalised in the stone work renovations! 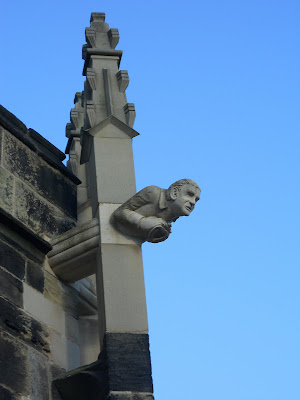 The monument to the disaster is (in my opinion) dreadful. It seems to imply that the fate of the victims was somehow there fault and there is a tone of "hell and damnation" about it. 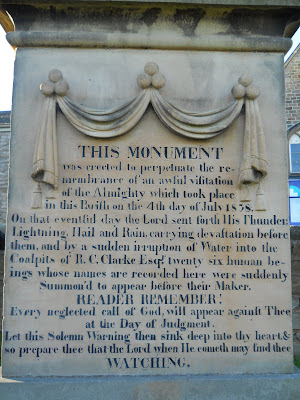 Its bad, because all of the victims were children. Boys and Girls as young as 7 years old. I don't like the wording on the monument at all. "mortal remains" "deposited" the words send shudders down my spine. 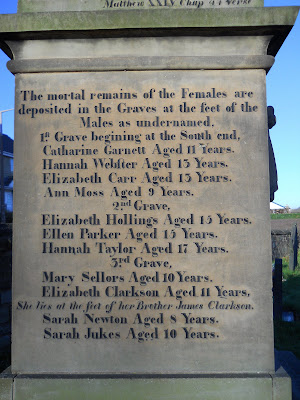 The horror is unimaginable. 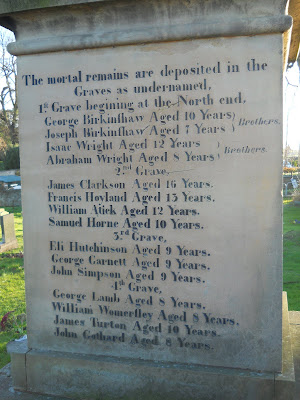 I think others must have been feeling the way I feel too, as the church congregation have recently been involved in a project which has seen the community come together to learn the art of stained glass and make a new window in the church. 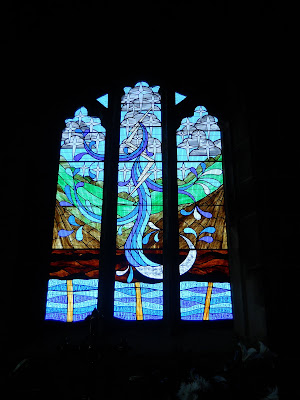 The window depicts the rain and flood waters. 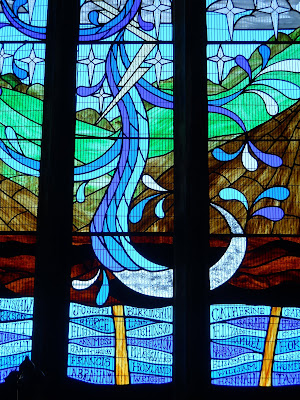 and also lists all the children's names who perished in the mine. 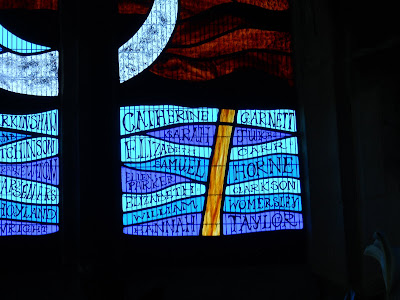 Its modern and beautiful and much more fitting.
Posted by Diane at Monday, November 15, 2010

Goodness, the original wording was over the top, wasn't it? Dreadful. The window is beautiful - gorgeous colours - and how lovely that local people did it. Disasters like that are so sad. I remember the Aberfan mining disaster in S Wales - again many children killed.

What a tragedy; those poor children! The language is very much of its time, isn't it? The new window is sad but very beautiful and reflects far more how we think today. Thanks for the link for more info - I know of 'Pitworks' as they have some of my research on there about my great grandfather being killed in the Shirebrook Colliery Pitcage accident in 1907.

Incredibly tragic.
And you're right, those words are so unfitting for those little ones.
Lisa x

The window is absolutely beautiful.

What a beautiful window.
Well done to the present day parishioners for creating a memorial with so much more feeling than the one created by their predecessors.
It's such a sad story about those children.
xx

The window is beutiful and it is wonderful that they are being remembered with kindness :)

A very touching post today. The new window is beautiful. It's such a sad story and what a monstrous old memorial though interesting and of its time I suppose, as is the fact the the females were "deposited in the graves at the feet of the males".

I guess the wording in the memorial shows its age. It would certainly be worded differently if it were done today. The stained glass is a much more poignant reminder of the tragic event, what a lovely way to try and remember

The window is beautiful and a much more fitting way to honour those poor children.

I suppose that's what was thought fitting in those days, though I totally agree with you.

I've never been to Yorkshire (YET!) but have been fascinated by collieries ever since I went to the Valleys in Wales.

Such a sad, tragic tale and, despite being from South Yorkshire, one I hadn't heard before.
Yes, the window will be a more fitting memorial.
Carol xx

I have just read this and feel really moved. I still find it difficult today to comprehend how children so young could be put to such awful employment and to have their lives snatched away like this. The wording on the monument is a reflection of the times but how harsh!. The new window is a wonderful memorial. It is good that people have been moved to put right the 'wrong' they feel has been done.

The orginal wording certainly is formally constrained as the times dictated...but times change, don't they? I think it is commendable that the new memorial window lists the individual names; it always bothers me when the first and last name of the deceased is omitted when it is available and could be used. Just seems like its the least that can be done.

This was truly a tragic event.

Such a sad story and I agree that the Monument is a bit grim - typically Victorian though. The new window is a much more appropriate and attractive memorial.

Um, glad I don't live in Victorian times after reading that! The children wouldn't be hurt by those words but the grieveing parents would. The new window is lovely though.