I like Fitzalan Square in Sheffield but it is not very loved. If I had a limitless pot of money, I would clean it and tart it up big style. 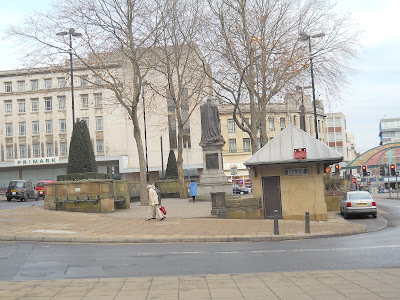 It has very wide pavements all around the square. If this was in any town or city in France, it would be lined with places to eat and have seating outside and on a Sunday morning it would be bustling with people. I'd love to have that kind of culture here - its one of the many things I love about France. Around Fitzalan Square, many of the shops and cafes have closed down. 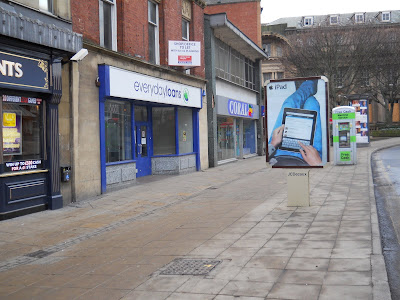 The most famous building in the square is the "Marples" pub - sadly not only not a pub anymore, but empty too. The old Marples pub was the site of the worst single loss of life in the Sheffield Blitz. Above 70 people died in the cellars. The German bombers missed their steel producing targets and the city centre was badly damaged. I was surprised to read that the Marples was actually called the "London Mart" but locals named it the Marples after its original landlord. 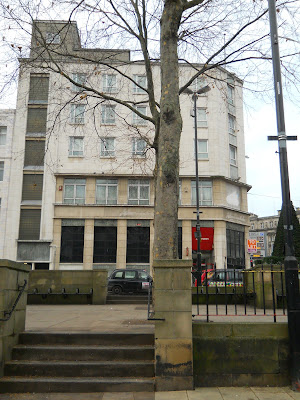 A statue of Edward VII stands proud in the square - a friend of the Duke of Norfolk who owned most of Sheffield at that time. 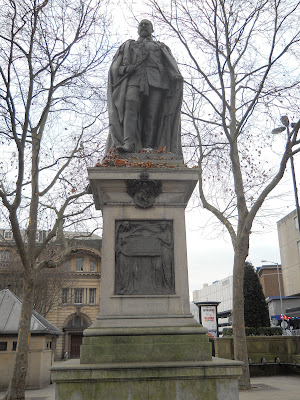 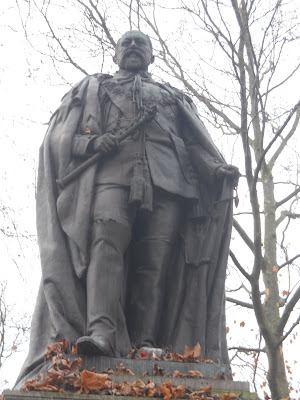 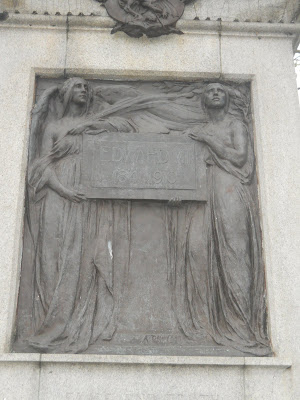 I love this building - simply called The White Building. It looks as if it houses flats. If these were in Paris, they would be very swanky. 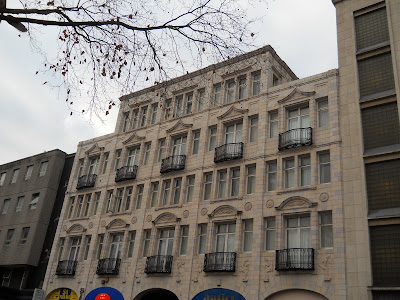 Before I was a blogger, I never noticed finer details on buildings, but now I examine buildings very carefully. 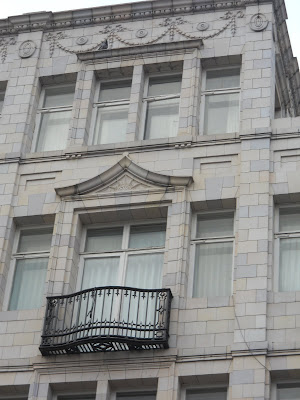 I'd never noticed the carvings of steel workers and cutlery makers before. There are many of these are they are lovely. 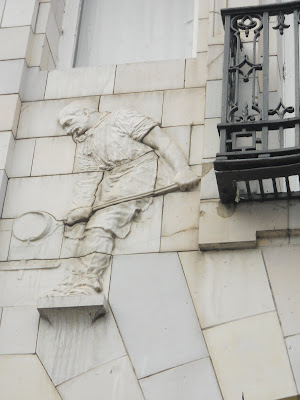 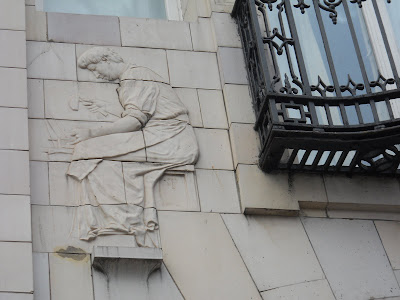 Another gorgeous building - again sadly empty - is the Old Post Office building. With my limitless pot of cash, I would turn this into an indoor food market. This would also feature little stalls selling proper hot food to go - like the lovely one in St Helier in Jersey where we ate fantastic hot pasta from the Italian Deli. 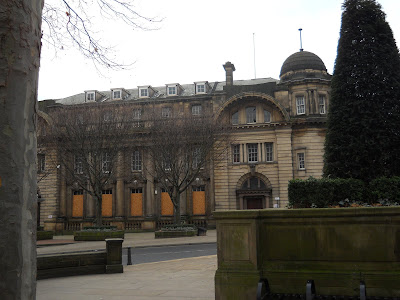 Whilst researching facts for Fitzalan Square, I came across this amazing website that seems to feature buildings that people have broken into to take photographs of the interiors!.
I don't know if anyone has any plans for the building - I hope they do something nice with it. 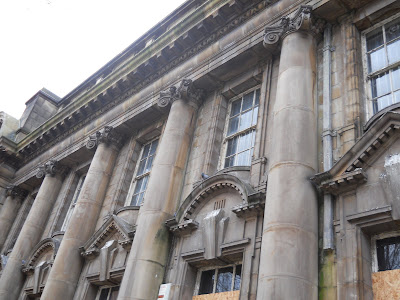 It has some pretty rusty railings around it - these surprised me as most old railings were sawn off and sent away for the war effort in WW2. 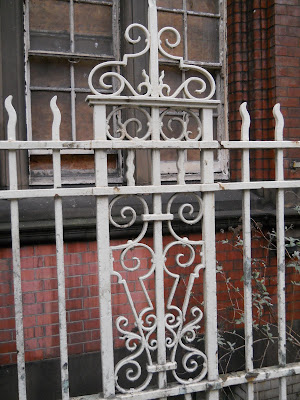 The back of the building, which I believe was the sorting office is built in brick, and the back has totally been demolished. 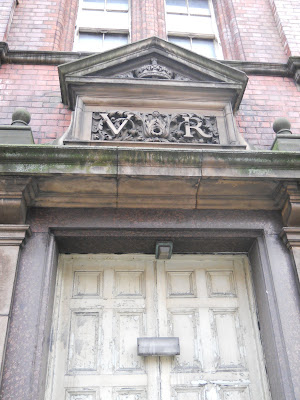 Even though its in a bit of a state, and there really is nothing much to see, I did enjoy my wander around Fitzalan Square.
Posted by Diane at Tuesday, January 25, 2011

Loving those thigh length boots on the King Edward!
I can't see many modern buildings being adnired like we all do these older ones.
And there is plenty to see, being a blogger you noticed so much!
Lisa x

You're right, those details on the buildings are marvellous. You have some very good ideas, let's hope somebody with lots of money sees this post!

It really upsets me when I see the old Post Office in the state it is, your idea of a food market is a brilliant one, you should mention it to the council! Like you I love the white building with the wonderful carvings of the steelworkers, you're right about it making some very upmarket apartments. As for the Marples Hotel I've never been able to make my mind up where it stood, was it where the little memorial plaque is or was it where some of the modern buildings now stand?

Beautiful buildings but so sad they are neglected. As you say in France it would be bustling with outdoor cafes and such, may be not in winter though :(
It all looks a bit empty and lost. I have to agree since blogging and walking around with a camera, I am much more observant then I used to be :) Diane

Great post again Diane have to say I have never noticed the white building = I have not walked in the square for years and years. I remember going to the cinema in the square but cant remember what it was called. You are right it is sadly neglected but has lots of potential - maybe one day. Just a quick funny years ago K saw a plaque to Edward VII King and said Edward the Viking who was he! I think it was on the V&A in London. I still laugh about it today = and remind him tee hee.

I agree with your visions-what wonderful ideas you have-these old buildings should be preserved and loved [and used !]and enjoyed by future generations to come !they just don`t make them like they use to!

When you have your limitless pot of money I would like to come and see the changes you have made. We just don't seem to value what we have in this country do we? Vive la France!!! x

Super post Diane. It is heartbreaking to see so many beautiful buildings empty and neglected. Your food market idea is a brilliant one:)

The carvings of the steelworkers are fantastic. There's some work been put in to them. The square itself looks lovely, it's only from the second photo where you show the shops around it where you realise that the surrounding area is run down, what a shame. I like your plans though, now don't forget your lottery ticket.

Lovely post - send a link to your local Council! The white building is beautiful - as you say, you can imagine it in France or Spain in the warm sun, surrounded by pavement cafes..... Actually in our town (Hereford) we now have two open air 'cafes' in the High Town centre square - two large portable (brought in on the back of a 4x4 each day) Cappuchino / soup / smoothie bars. One of them has outdoor heaters too and sheepskins on the (cold) chairs!

It breaks my heart to see places like this being neglected. We have so much history in the UK, that deserves to be preserved... but instead money is ploughed into crackpot schemes and wasted. I read the comments above and agree, you should forward this and the responses to the council... Make them sit up and take notice.
Take care. Lx

You have some good ideas, how sad to see the area so run down. It has a lot of potential so maybe one day it will be improved.

Maybe you could start a little campaign!

I thought they were going to 'loft' the Post Office or is that my imagination? Also to be seen on one side are the former gas offices which also have reliefs relating to the sun - in the days before solar power.

wow such beautiful architecture and sculpture.
it makes me think about how many times people walk by these things without even noticing.
i am glad that you have an eye for beautiful and interesting things and that you share them with us :o)

i had a look for that book on amazon but they have sold out. hope they get some more in stock soon as i'd so love to read it.

sorry i am jumping ahead there.

having a day off has gone to my head.

I used to like going in the old post office....
at least the nearby "hole in the road" had gone ..it was a dump!

Hope your cold is getting better

ps
I have nominated you for my own style award!!!!!!
too

Oh Diane, your pics are like a blast from the past for me. I remember Fitzalan Square (vaguely) and John, above, has mentioned "t'hole in t'road". I clean forgotten about that place. V. interesting post.

Me again - I forgot to mention -you posted about people taking photos inside derelict buildings. On Sunday K took Nellie to town to take photos for her GCSE photography her brief is derelict buildings her dad took her around and about and she took some photos of The Pearl Works (near The Globe) she put the camera through the window and took some inside shots - turned out well. I'd love to go inside some of the buildings but I think I would be scared. I do think my Dad used to though I think he might have once gone into his old school.

Thank you so much for the wonderful pictures. I, too, love pictures of buildings.

I would love to have seen this place in its hayday when it was a bustling vibrant area. It just looks so unloved now.

Thankyou Diane commenting about sewing machines on my blog . I have tried the applique stitch tonight and it was o.k . I can get by with straight st, and applique , lovely to know yours is an old faithful . mine is a Brother innovis nx 200 , not a top of the range but has always worked as hard as I,ve pushed it . Lot,s of quilts and quilting to it,s credit. I just don,t want to replace it--cottonreel

When it comes to your pot of money I like your thinking. I often look up at buildings and it's surprising what lovely architecture is above tacky shop fronts. I love looking at the buildings in Pontefract when I'm over there. As you say if we were in France these places would be well loved.
twiggy x

I totally agree with you, such a waste of so many old buildings. I remember to going to a seaside place in England last time I was there and also that too was completely run-down, from it distance it looked glorious but when we came nearer it was all boarded up and they only had a bingo hall and fish & chip shop, very British but a bit sad. I truly hope you win the big lotto then there will be hope yet for Northern England. xx

It is a crying shame that the square isn't a vibrant area like the ones in France. The details you found in the white building are wonderful. I hope i is never destroyed like the post office. That derelict site was amazing,
I'm glad you found my story of migrating to Australia. It was an adventure for our family and not an easy one in the beginning. I am planning on continuing the story one day. Even though our country was started off with thieves and villains, you are regarded as someone special now if you can trace your ancestry back to the First Fleet. They have a special club called the First Fleeters.