Once Round the Lump

After I had written my post about the Adelphi Theatre in Attercliffe, new kid on the blogger Deb left me a comment saying that her family had lived in Attercliffe and her Aunt had written a book about the people that had lived and worked there before it was flattened in the regeneration program. It sounded interesting, and so I trawled Amazon, found it, sent for it and it arrived on Saturday morning. I couldn't put it down. Its a fascinating book featuring many mainly family photographs that tell of how life was living, working, playing and shopping in Sheffield's very industrialised heartland.

Some of the things that Ann writes made my spine tingle. Her intro into the book starts " I always thought that my childhood was a figment of my imagination because there is nothing left of the homes and streets I grew up in."

She goes on to say "There was a culture of full employment and youngsters had lots to do after school. The facilities we had were second to none: Play centres, youth clubs, churches, chapels and all the clubs attached to them. We had cinemas, pubs, sports clubs, a library, a swimming pool, dance halls, snooker halls, and the money to go to them." 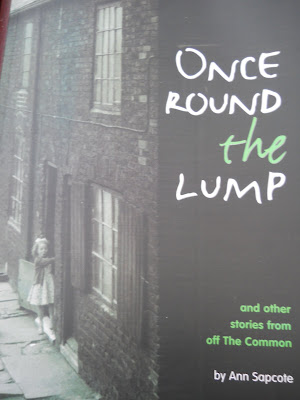 The photographs show that houses that we would consider to be slums these day were actually spotlessly clean homes in spotless streets that had no grafitti or litter. Extended supportive families and a strong community that worked together and played together are so evident in the photographs and the writing.

"A bang with the rake on the fire-back would bring the next-door neighbour in for a cup of tea."

Ann asks the question "What went wrong?" Why was poor housing seen as enough reason to destroy a community that was on the whole law abiding and not afraid of hard work" and it got me wondering too. Why, when things should have got better for society, when people were given better housing with indoor bathrooms, central heating etc, did things go downhill so badly?

Thank you Deb for mentioning the book to me (tell your Aunt you want commission!!). Its one of the best reads ever.

There is a really good display in Weston park Museum, Sheffield about Attercliffe and it inhabitants too which always fascinates me. Human stories about everyday life, struggles and joys are the best stories ever.
Posted by Diane at Sunday, January 23, 2011

that sounds right up my street - no pun intended but it actually could be about where my family grew up - the stories my nanna tells, sound so idyllic yet lived on tuppence h'apenny! You should be on commission too as ther's gonna be a few hits on amazon for that, I know my mam'd love it - a mothers day prezzie sorted!
Thanks for the comment on my post - you've SO got the measure of me - a wedding organised round cake, SPOT ON!! Add the alcohol and thats all thats needed haha xx

Sounds like an interesting read, and this is a great book review that raises some interesting points.

Oh Diane I have got goosebumps reading your post - I feel a little tearful actually - that is my family history and I feel really proud - am crying now - my Dad would have loved what you have said and when I am in touch with Aunty Ann I will tell her - she will be delighted I am sure. I was about to reveal to you the page on which I am featured but do you know what - I can't find my copy - it is normally next to my bed and it's not there - actually I think I will do a post on it and a big reveal - I was a big baby - I was 10lb 4oz born at home and the Doctor - think it was Dr Wainwright - mentioned in the book - said to my Dad and my Nan 'congratulations - you have a baby elephant' - must be why I have a good sense of humour. SO glad you enjoyed it.

Just read your review, after hearing about it from Debs. It really does sound like a great read. I hail from Nottinghamshire and too saw the local villages ruined after the mines were closed. I miss England so much, but when I return home, I often hear that I have rose coloured specs and that the 'home' that I know has changed beyond recognition. Great to have found your blog! Lx

Just popped over from Two Bones and a Bagle - It sounds like a wonderful book and rose-tinted or not I think there was a sense of community and respect then which seems lacking today - when my gran used to tell me stories the heart of them were always fun and laughter, despite 11 children in a 2 bedroom house! Thanks for such a fantastic review - I really want to read it now :0)

Must get this book, I rather think I might have seen it in Waterstones at some point but I didn't pick it to look at it. I remember the kind of local communities in so-called slum areas very clearly, the damage was done in the 60s and a great deal of heartbreak was caused by the forced removal of people who had lived their whole lives in these areas. The awful soul-less concrete high rises were the beginning of all the social problems we have today.
Weston Park Museum is brilliant isn't it? I love the room and shop settings they have in there.

I think this could have been written about most cities. It sounds like a wonderful book, I'm sure there'll be lots of purchases after everyone's read your review.

Oh Diane how exciting cant wait to tell my mum and Aunty Ann - I think I will do snail mail - I don't write letters very often but I know Aunty Ann would like it. I found my copy and had a good read in bed - I did get a bit fraught when I couldn't find it - it was on K's side of the bed not mine. Me with followers - can't believe it - i'm having great fun Deb X

What a great review, Diane, I'd love to read the book - just my kind of thing as I love local/oral history type books; it sounds fascinating:)

i would love to read this. i think my next stop will be Amazon :o)

i can always remember my nan telling me how much better the community and family connections were in the 'old days'.

wouldn't it be lovely if we could have all the modern comforts we are used to and friendly commuities. i'm sure it's possible.

wishing you a lovely week

how fascinating and not a little heart breaking....as you say, what did go so terribly wrong??

This looks like a great book to read. I don't come from the North but even down here in the South East people used to take pride in their surroundings. The neighbours used to sweep their pathways daily and keep the doorstep polished and their nets clean. I think we lost our pride. I think it has been knocked out of us. x