...was accompanied by the giant that is the young man as hubby had gone to work. (My 15 year old is only 5 inches shorter than his dad now! ) The young man was not keen, but I managed to persuade him and we had a lovely time - chatting about his day and GCSE year as we went. 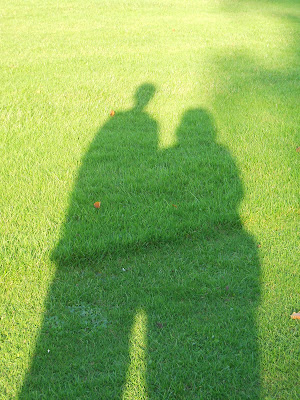 I decided we would walk down the park at Wentworth - always an easy stroll and always so very very beautiful - no matter what time of year. We parked by one of the gatehouses - it always amazes me that people still live in these tiny places. 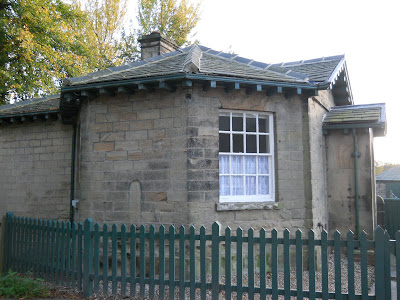 Many locals remember a time when the big house was a college for women - PE teachers in training I think. ( I wrote a long sentance about female PE teachers here, based on my experiences in the 1970's at a Barnsley Comprehensive school - but deleted in case my teachers read it and sued me!!! ) A lot of the facilities from this time remain. The police use the site these days for fire arms/dog/seige training these days, and it can be a bit alarming if you walk down the park when the training is in full swing! 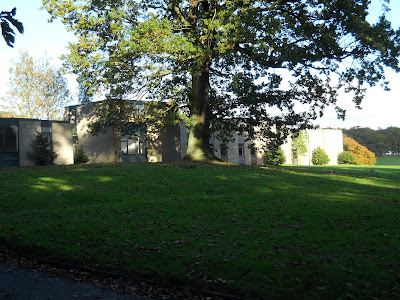 The stable block is the first building you happen upon - and its very impressive. In recent years, one tenant (a London property developer with a house on the mall!) housed his collection of "vehicles from the 20th century" in here - until his impossibly young and pretty wife of a year divorced him - and presumably ran off with wads of his dosh. 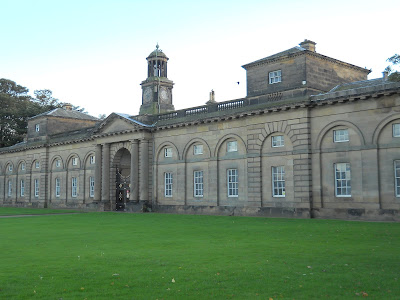 Someone has taken time to paint the gates. 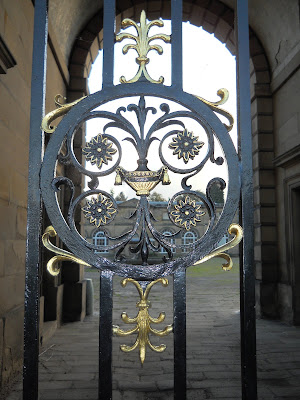 And I love the ruts on the floor - evidence of many years of wear by carriage wheels. 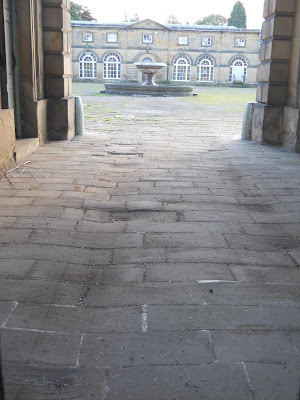 We proceeded down through the deer park. At one time this century, they dug up the whole of the park to open cast mine it - I'll have to dig some of the pictures out that I have in a book - it looked a real mess then. You should have heard the noise that the stags were making - really loud! 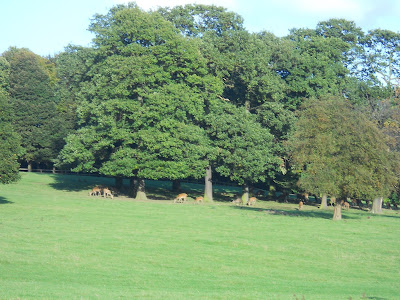 You get great vista's of the many "follies" that were built around the area. 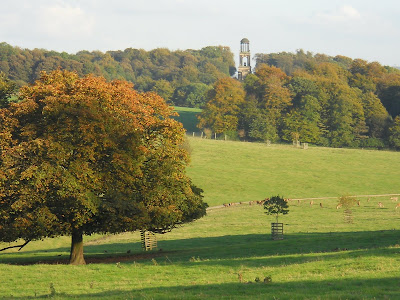 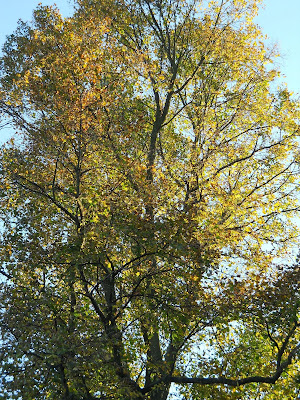 The house itself is amazing. Wentworth Woodhouse is my most favourite stately home in the UK. It is still occupied (by a recluse - the Fitzwilliams sold a 100 year lease on the house, so it still remains in what is left of the family really). What I wouldn't give to have a good old nosey around. The fact that you are allowed to walk past - tantalisingly close - is pure torture! 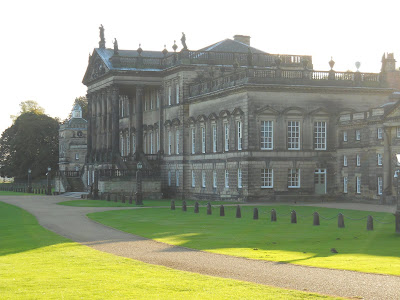 Ive mentioned before that it has features in films and the odd TV series, and I believe it features in the Guiness book of records for something like having the longest frontage of any house in Britain, or something similar. 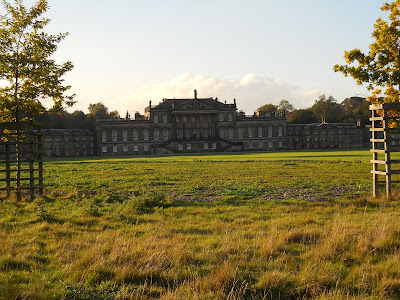 Any way, it is a splendid, mysterious, intriguing house - full of history and secrets. Apparantly in the early 1970's, the family burned many archived records. The fire burned for almost 3 days. It is rumoured that they were covering up illegitimate births which might have led to some "outsider" claiming a title! Fascinating! - especially as I had a relative - who when she died, it was discovered she had a photograph of one of the earls in her purse!! He was known to have had many daliances with local ladies, and my relative was very flighty!! 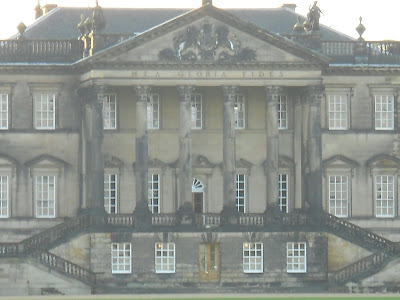 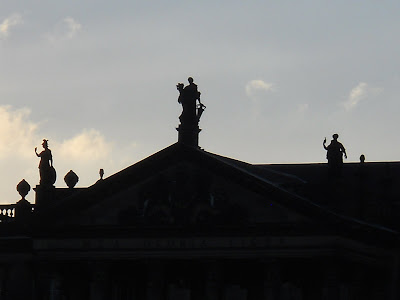 We were going to continue our walk down to the lakes, but a full pheasant shoot was in full swing - and we got a bit scared (of stray bullets! - who says the countryside is a peaceful place).
Any way, I'm off to spend the rest of the evening with Nigella, Hugh FW, and "whoopsed" bottle of red from Asda (down to £3.50 from £9.00).
Posted by Diane at Thursday, October 07, 2010

What a gorgeous old house and it is a surprise to hear it is still lived in. It must cost a lot to keep it maintained. You never know you might be a distant relative. The scenery is beautiful shame about the bullets. I think what attracted me to your blog is that you live near where I was born and your name he he he.

It sounds like you had a lovely walk with your son. What a fun way to make a lasting memory. Your pictures, as always, are amazing. And the stories behind them are so fun!

Manchester Lass, Now and Then said...

What a lovely post. Loved the photos and information regarding the house. When I was much younger and living in the UK I had a book listing 100's of homes, it was my intention to visit as many as possible. Hopefully one day I may return to carry on that dream:)

Hello you - thanks for your comment, still here - took some time out to look for a few marbles that have been missing!

I continue to find your posts are like chicken soup for my soul!

I've heard of this house but never seen it. It would be great to have a nosey round inside!

Keep delving Diane, you may find it's rightfully yours! But can you imagine the heating bills?

I've enjoyed my walks here, so interesting. You're very knowledgable.
I watched Hugh tonight, but will watch Nigella on Saturday.

Me, me, remember me, when you find that whisper of paper that states that you are the rightful heir.

It is a very imposing building, so steeped in history, if only the walls could talk!
Love the first pic with your young man.
Hope you enjoyed your red and the TV.
Lisa x

It looks a intruiging place - like you, I woiuld just love to see inside. I bet there are rooms there that haven't been opened in years, full of all sorts of treasures!!

Looks like a lovely walk! You can feel the history steeped into those ruts! My date last night was with Nigella, a bottle of chardonnay and an open fire. Hope you enjoyed yours as much as I did!

How I'd love to see inside the house - must be so tantalising to be able to get so close. Our PE teacher at school was very 'waspish' she called us all 'silly cuckoos' - I'm sure she'd have preferred a stronger word!

We still haven't visited and MUST as we live so nearby. It looks so impressive, your comment about your flighty relative did make me giggle !!
Twiggy x

I can't even imagine going for an evening walk near such a fabulous place! You are, indeed, very fortunate! The best picture, though, is the one of the shadows...very sweet, knowing it is your and our son setting out together for the evening stroll! You ARE indeed a lucky woman.

Ooh I'd love a nosey inside too! I love gatehouses, they're so quirky.

I love these walks you take us on. My young man towers over me too !
My brother lived in a gate house when he worked at a zoo park. It was cold & damp !
Where mum lives it was a naval base now is Military police training & you see the guys running up & down with heavy packs. You wouldn't think in a place like that mum would get burgled - but she did !

Hi Diane! Just to let you know, you won my giveaway on my blog.... congratulations! If you could send me your address (my email is on my blog) then i'll get your parcel off to you in the next few days! x

Hellow!
I love your site, It is a pleasure to visit.
I have added your site to my site.
Please link my site to your site.
Thank you!
http://strollinguncle.blogspot.com