...a very quick roundup of the rest of what we did in France. I can't believe we only had 2 weeks there - we did fit a lot in, but it was very relaxing too!!

We visited castles in Caen, 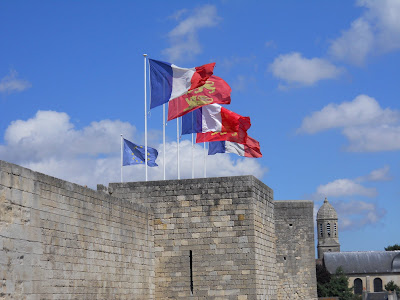 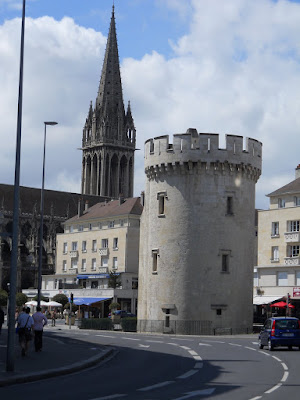 found every home "Farrow'd and Ball'd" - I loved this one in the Blangy Le Chateau - the next village to the campsite. 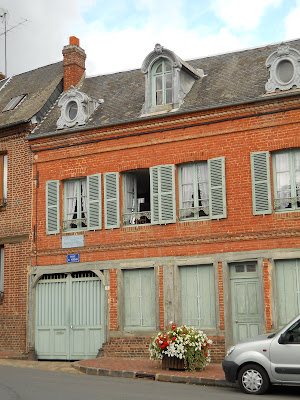 Drooled over patisserie and macaroons (and even bought the odd box full!) 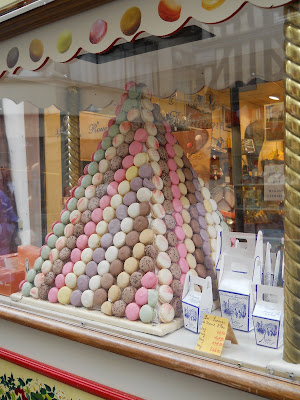 Spent a rainy day in Rouen (another massive church!! in fact Rouen had 3 Cathedral sized church's!!!) 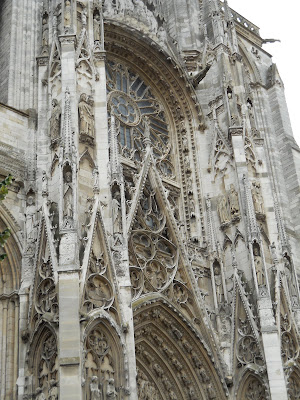 This one had taken some direct hits in the war and had taken ages to repair, in fact most of Rouen had been flattened and rebuilt - its still having a lot of rebuilding done today. It reminded me very much of our northern towns, especially Leeds. 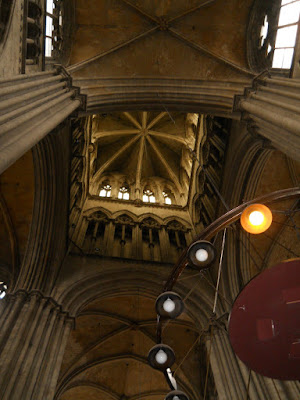 Every where in France looks like the film set from Harry Potter. This staircase in the Cathedral definitely did. 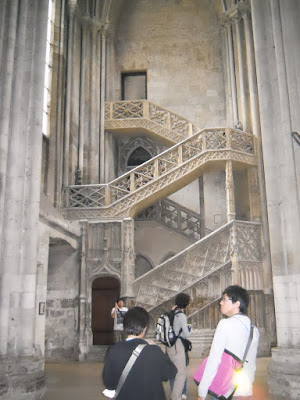 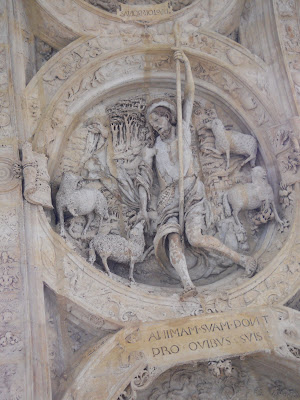 The old parts of the town had been restored beautifully. 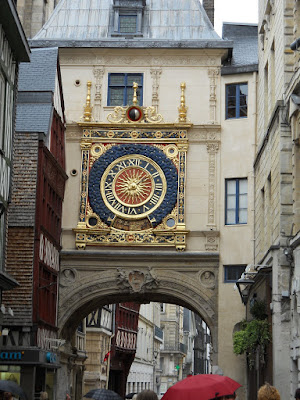 I'd forgotten that Joan of Arc was burned at the stake here - on this very spot. 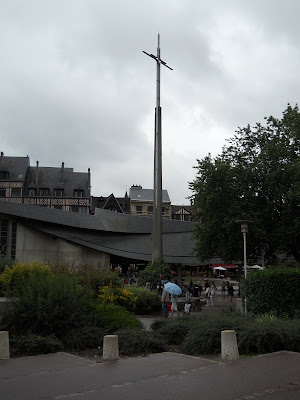 The church dedicated to Joan of Arc was very modern and quite unusual. 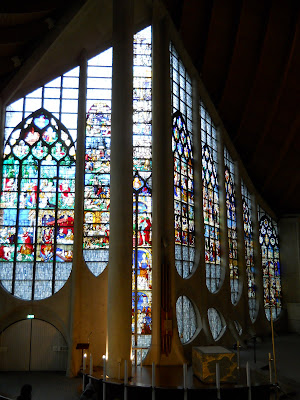 The "sculpture" (which looked like Keplunk sticks!) across the bridge which spans the Seinne, certainly brightened the gloomy day. 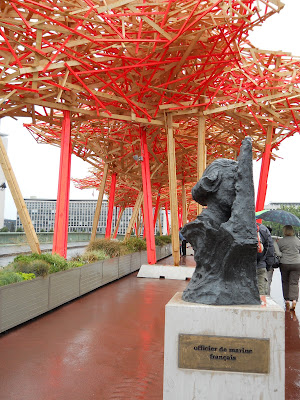 We spent a wonderful evening at a local cider farm. The farmer said it had been a good year for apples. 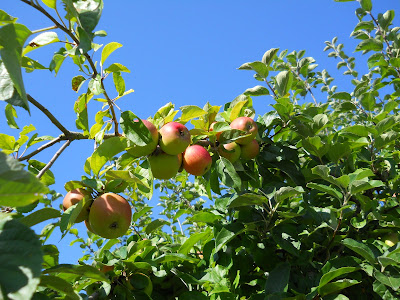 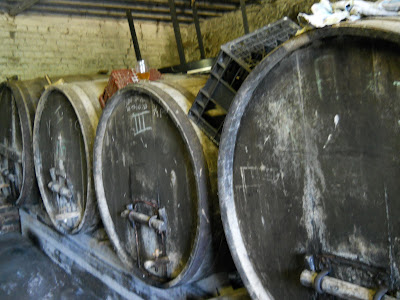 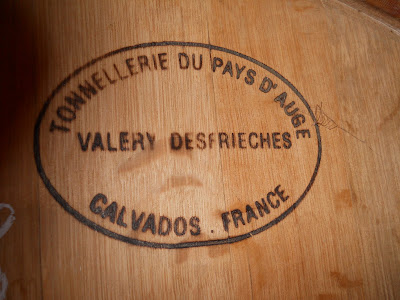 We visited loads of little towns that were well off the tourist trail and so very very pretty. 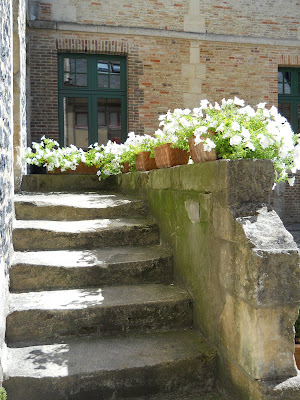 Pont Audemere was a sweet little place with canals running through the town. In the olden days, the towns industry had been tanning (hides, not sunbathing bodies!). 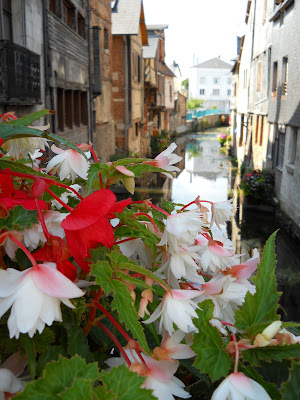 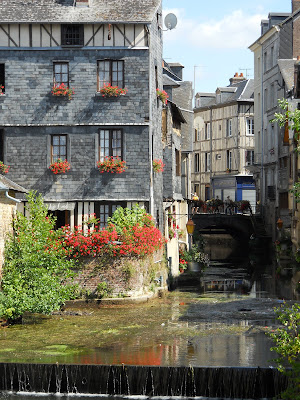 Ah well. Farewell to France - until next time.
Posted by Diane at Wednesday, August 25, 2010

you certainly did cram a lot in and your lovely pics have made me look at France through very different eyes - I just love that last pic .

I've enjoyed all your posts about your holiday; you took some fab photos, thanks for sharing all your good times, and can I come with you next year? xx

How beautiful. Thanks for showing us some wonderful photos.

I would love to be able to take two weeks in a row...I'm limited to taking each of my 15 vacation days in no more than 5 day increments. When I retire, we can do longer stays because my husbands company has no such restriction. That's when I'll pull up all these posts you've done so I can plan my trip! Lol!

It all looks so lovely... As if straight from my own imagination!

I have never been to France , I wonder would an organised tour be the best plan for a person on her own ?--cottonreel

ahhhhhhh....thanks for the tour diane....am itching to return. i have booked a week in september and am on the search for a B & B a bit further south to try and catch a bit of sun. good idea re the volunteering, but not really open to discussions re future at the minute.....working is just taking it out of her poor lamb (welcome to the real world) congrats to DQ...very well done

Thankyou Diane for leaving me info about a hol,. in france and your comment on my quilt--cottonreel

Bet you were glad that town doesn't still have a tanning industry, a bit pongy!
I love photos of stone walls with terracotta pots and plants balanced along them.
Bet you are planning what to see on your next visit already.
Lisa x

Hoping to get over to France myself for a week in September, will have to brush up on my photography skills if I'm going to be able to take half as many cool pictures as you though!

Wow, thanks for sharing all your super photos, Diane - I've loved looking at them all! Love the Harry Potter staircase and the macaroon tower is amazing - you've seen some lovely places - last time we were in France we came back with a bottle of Calvados and some cider, too:)

What superb photos! Looks like you had sun, too.

That part of France looks so old and attractive, with such lovely hidden corners.

a macaroon mountain!! why don't we all just move to France, what's not to love???

You've taken some lovely photos - makes me want to visit Northern France, I've never been there and in fact I've only ever been to France once! The villages and castles look really attractive and interesting,I'll have to suggest a visit with one of my sons - I don't do driving on the wrong side of the road:)

I've loved reading all your holiday adventures and enjoyed the photo's. We have visited some of the places, but definately not all. I can't believe you got any rest, as it looks like you were on the go 24/7. You definately made the most of your French vacance. I have actually recommended a friend your camping they are planning a camping trip to Normandy so I gave her lots of wonderful tips, all from your blog. The campsite looks ab fab, such a romantic (out of season) setting. Thanks Diane, you are the best! xx