Being as it was hubby's 50th birthday earlier in the year, we had said that he could choose this years holiday destination, and it came as no surprise to any of us when he said that he would like to visit the landing beaches in Normandy. He is a bit of a World War 2 boff and he had always wanted to visit here since he was young. On the day that we did the American sector, the weather was very grey and mizzly (but strangely warm) and we all thought that it fitted the solemn mood. Our first port of call was St Mere Eglise. An American Parachute had accidentally been snagged on the church spire and he played dead for 2 hours before the Germans cut him down. I was relieved to read that he survived the war. They still hang a dummy on the church to commemorate this. 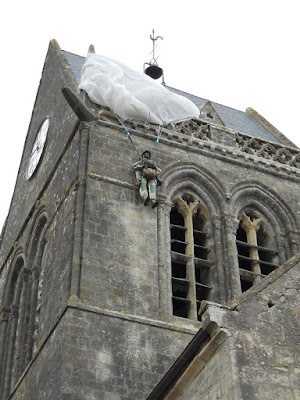 The stained glass window in the church depicts the importance of the ParachuteRegiment in the liberation of the village. 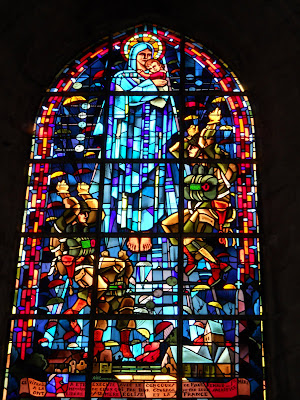 We then moved on to Utah Beach. Its hard to imagine what this would have looked like on the morning of the 6th June 1944 when the allies landed - and also the days after once the beaches had been secured and the tanks and jeeps began rolling in. 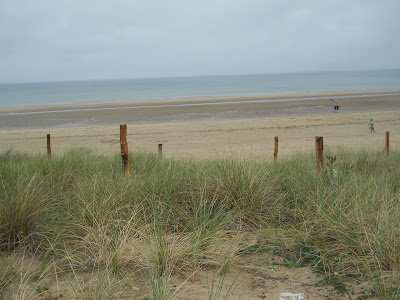 I thought that the kids would be bored, but they asked so many questions - all of which Dad answered in much detail. 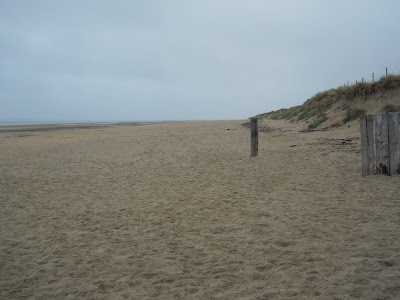 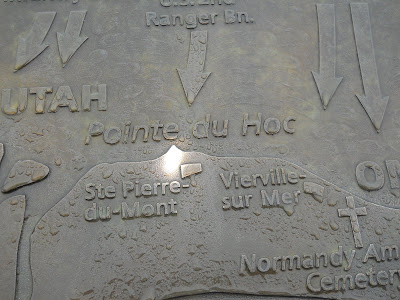 I was fascinated by the work being carried out to save the cliffs which are crumbling into the sea, 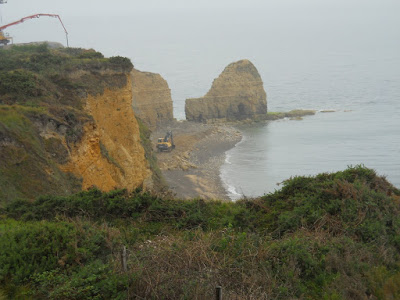 But the boys were more interested in exploring the Batteries and holes across the whole site. At this place, the Allies had to climb the cliffs once they had landed on the beach. 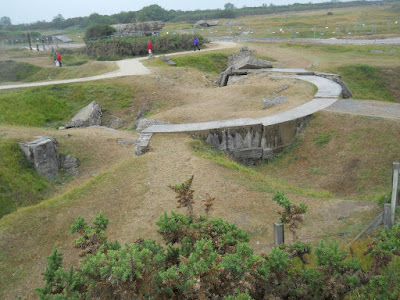 The area around here is littered with old bits of equipment like this landing craft. Hubby had us jumping in and out of the car to explore every piece! 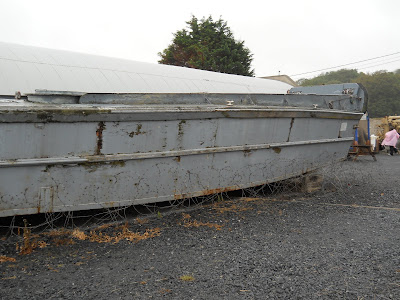 We then went to Omaha Beach which was also massive. This temporary sculpture has been here at least 3 years longer than they intended it to be. It lights up blue in the evening. I bet it looks spectacular. 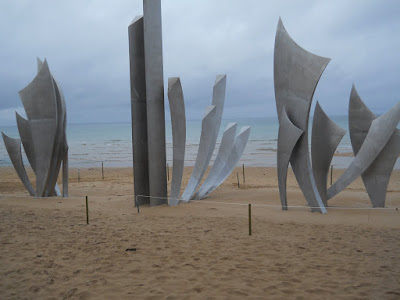 At the bottom end of Omaha Beach, lies the huge American Cemetery. It was around 5pm when we got here and I expected it to be fairly empty - the car park was packed! The sun came out too at this point. It is set in the most beautiful of settings (its the one featured at the start and finish of "Saving Private Ryan"). 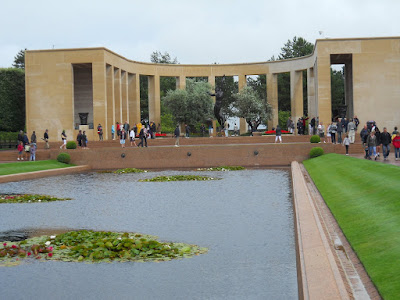 Nothing prepares you for the sight of 9387 graves - stretching as far as the (very watery) eye can see. It knocks you sideways. I couldn't help think of all the mothers who never got to see the final resting place of their sons. Hubby read me lots of facts and figures about the place, but the one that stuck was that their were 42 sets of brothers laid to rest here. 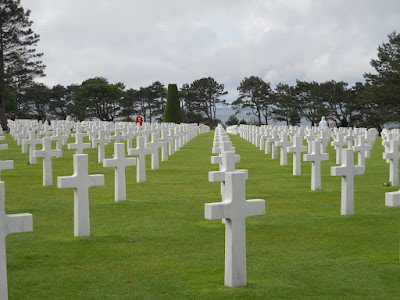 There are only 4 that have the "Medal of Honour" . I was amazed to find one, and a famous one at that too. He is buried with his brother by his side. His brother is the only one in the cemetery from the first world war. 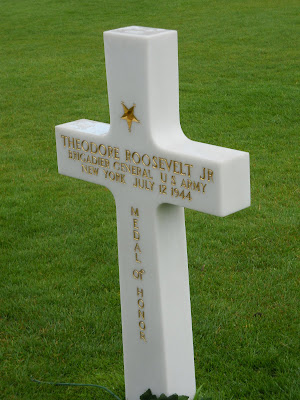 The mosaic on the chapel ceiling was beautiful. 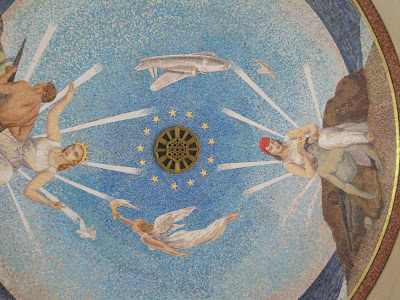 Finally, it was off to Arromanche for refreshments!! Here you could see the remains of the magnificent Mulberry Harbour that was built by the Allies to land tanks etc. So much of it is still intact. 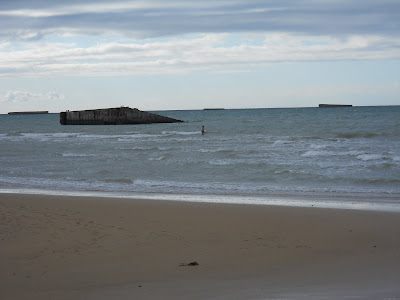 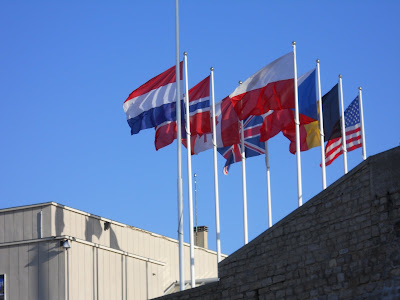 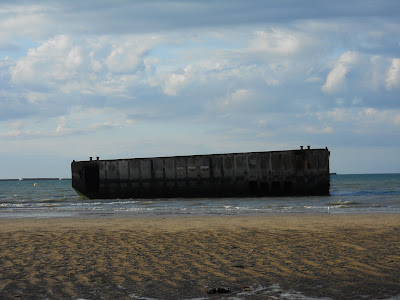 It was a very special day for hubby as he had held a dream to visit for so long, but we all thought it was one of the most interesting and moving days out we had ever had.
Posted by Diane at Monday, August 16, 2010

I find personal stories about WW1 & WW2 fascinating, so I'm so pleased that you've shown me around via your blog, as this is somewhere that I couldn't face visiting myself - I find places like this extremely upsetting. You can't begin to appreciate the sacrifices that men and women were prepared to do for their fellow human beings can you?

Whilst I travelled through Germany, I visited Dachau (nr Munich) - It upset me so much that it made me physically sick and I had to leave. The same happened when I visited the Imperial War Museum a few backs.

I've always wanted to go to see the graves in Normandy and do a tour of the beaches etc. It sounds very moving and emotional, take care x

What a wonderful post. I would dearly love to visit this area (in fact we nearly organised it for this Summer), I think it's important to see and appreciate all that those brave soldiers did for us. Like Jill, I visited Dachau with my parents when I was 16. I was so moved by it I had nightmares for weeks afterwards and still haven't forgotten what I saw there that day. How fantastic for your hubby to fulfill his dream at last.

My husband, too, has a keen interest in WWII. We visited Pearl Harbor when in Hawaii (actually planned our entire trip around that day). You outing sounds like something LT would love to do.

While I don't put a lot of "stock" in "Hollywood History" I must say that Saving Private Ryan pulled at my heart so hard during the opening scenes I actually turned my face downward to avoid the movie screen. I just kept thinking about those boys...just boys...young, barely grown. How frightened they must have been. Someday, LT and I will walk there and remember them as you did. Thanks for this post!

What a moving and respectful thing to do, especially with younger people who have less connection about the world wars than those of us who heard it from our parents and grandparents.

Your hubby had a wonderful if very thought provoking treat, and it is so nice to hear that your little ones wanted to know something about the things they saw. This is the way to teach them about history. I bet they will remember this trip for a long time to come. Your post was very interesting and very moving. Thank you

What a moving post and so very important that your two children got to partake in this visit.

That must have been a very moving day. So many good men died there, even though it was a success.

And most of the preparations, including the mulberry harbour bits, were kept secret. Amazing!

What things you have seen, Diane - such an interesting and moving post! Something you will all remember - seeing these places and learning about what happened there is very humbling. When we were last in France we visited Barfleur and places down the coast which told the story of life in occupied France and of the resistance movement - some of those stories were very moving.

We've been to Normandy a couple of times. Sadly, only as a ferry port destination, so have only really seen the beach and harbour.

Really nice to read your blog and find out and see more about the place. Thank you.

Hey Diane we went to omaha beach too and arromanche.

I found it quite moving knowing that men died on that lovely beach, especially as the seaside is such a calm and relaxing place to me...so sad..

So pleased for Mr H getting his dream holiday location. I think I would have had to send him on his own though, I reckon I would have been in tears the whole time. Just seeing the calm beach and then all those rows of crosses has made me blub.
Lisa x