You know I love camping and could quite happily live in my tent all summer long! One of the things I like is the challenge of feeding four hungry mouths without the aid of a fridge or any other fancy kitchen equipment - in fact just my little 2 ring, 1 grill stove (note the invisible mending of the broken knob with "gaffer" tape!). My family reckon I should write a Camp Cook Book. This offering consisted of :
Diced "Saucisson" type sausage bought from one of the many great markets. This type of sausage doesn't need a fridge so its ideal for campers.
Onions, peppers, garlic, sliced cooked potatoes, tomatoes - all fried in olive oil.
When cooked, I added an egg each on top and continued cooking until they were set, then added some torn basil leaves. 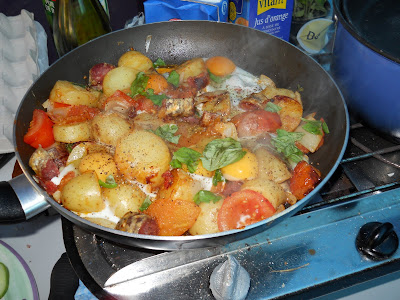 We chose our campsite from the "Cool Camping in France" book, cross referencing using www.ukcampsites.co.uk (a bit of a misnomer as they do feature french ones too) just to check the feedback from previous campers (its always been pretty accurate). "Camping Le Brevedant" was spot on for us. The site is a former hunting lodge from the 1700's and has been owned by the same family for hundreds of years. Madame Bony who owns the site invited us all into her salon in the lodge on Sunday evening to hear her stories about growing up here, and the German occupation of the lodge and how the family ran out of money and how turning the site into a campsite meant that they kept the property in the family. Her son Raphael helps her run it now. He is a bit of a hippy and has a very laid back style - which we liked very much. He is very much into music and campers were invited to play their instruments in the bar in the lodge throughout the week - which added to the relaxed atmosphere. 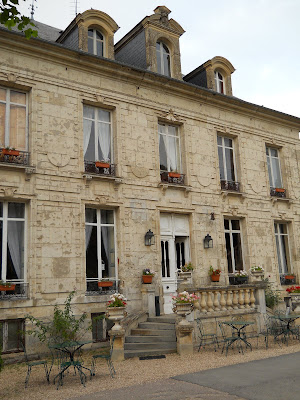 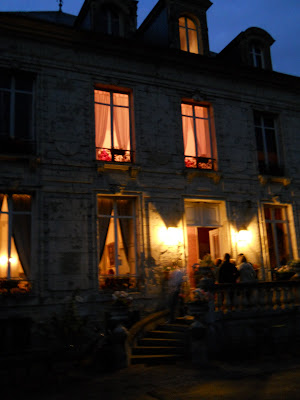 The site is not perfect - it has one or too problems, but fortunately none of these affected us. We had a great pitch - just the swimming pool between us and the house on one side, and the lake on the other. We took our holiday tent with us this time - affectionately known as "the millennium dome" as it has a large circular living area with capsule bedrooms off this - another great end of season bargain. It had been £600 but we got it for £100 and have had plenty of use out of it. Its great for longer spells camping as it has plenty of room for table and chairs etc if it rains and a long tunnel where I can do the cooking. 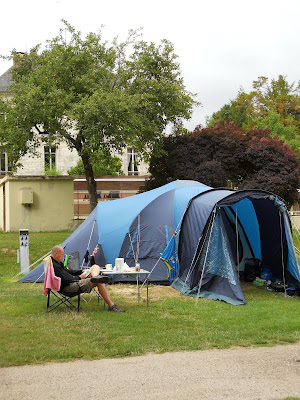 One of the reasons for choosing this site was that it had a few amenities for entertaining a 15 year old boy - one of these being the (green) lake where you could fish or take the canoes out for a paddle. 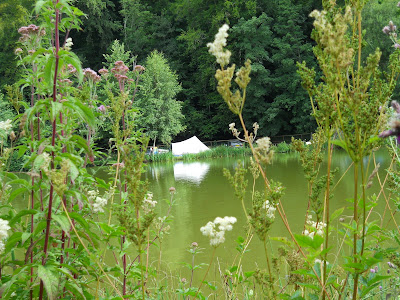 However after his white water rafting holiday with school last year, a calm lake didn't appeal to him. But Hiawatha and Mini Haha found the experience very calming - no whinging kids in earshot! 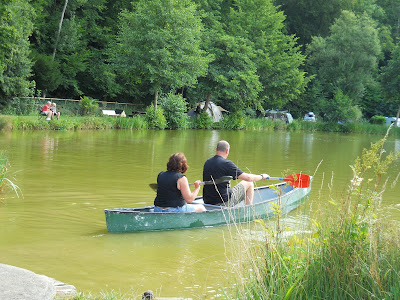 Yum, your dish looks delicious. Sounds like a fun holiday was had by all ... :0)

I love the idea of the egg! Clever! We have toyed with the idea of actually buying a camping trailer to haul behind the truck...but, I'm not sure I could enjoy doing even that much "camping." Usually, I consider it camping if I can't see "Hilton" on the guest towels! Some day I'll blog about our one and only camping experience...it was a challenge to say the least.

So, I'm pretty much in awe of your adventures, and truly wish I had it in me!!

And a cookbook is a great idea...or at least a dedicated blog to camping recipes!

That does look fun. I am currently dreaming of a continental camping trip but I think I need to come to you for a few lessons first.

A stunning house!
Did you have fun messing about on the water?!
Lisa x

You look like your having a ball, what a stunning location.

A clever cook! Your photos brought back our camping days! We used to do a lot of camping when Sue was small, had a frame tent, and later added sides to the awning, so had quite a bit of room.

Ah, I remember the sound of torrential rain on the tent.......

I stayed at that campsite about 4 years ago and even though it was july and hot some of the days it was freezing at night and when the rain started and the tent leaked we gave up. Loved the area though, we drove to Granville and Mont Saint Michel but im sad I missed the places you visited. Nice site though and the breakfast croissants were lovely.