or is it?
It was the W.I.'s silver anniversary and they were having a party. We all had to put down what we would make for the buffet - I volunteered my signature Savoury Quiche (school recipe!).

So I made my quiche, at the same time as I was making a Tarte Tatin (aka Rotherham Tart - previous post) as multi tasking is always the order of the day in my kitchen. However, whilst frying my bacon and onions, I decided to use the leftover butter that was in the pan that I had fried the apples in. Great idea, except that this also had SUGAR in it!!!!
So what could I do? - I could throw it away and start again - but I don't like waste, or I could continue and pretend I had used caramelised onions (as they are very sweet aren't they!). 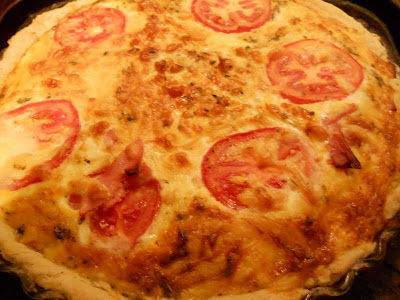 So I made the shortcrust pastry base, continued frying the chopped onions and bacon - adding these to the base. Then I grated cheddar cheese on top and added egg, milk and a few chopped herbs - decorated with sliced tomatoes and put in the oven (at 200 degrees c)for 20 minutes, before reducing to to 160 degrees c until it was cooked.

So then I took it to the W.I. untasted!! I know how to live life on the edge!

Once the buffet opened, I dove in for a taste (if it was dire, I was going to remove it from the table!!) but discovered it was pretty good - yes you could taste the sweetness and it was a bit unusual, but good never the less! However, if you have a go at it, I'd omit the sugar and stick to salt and pepper.
Posted by Diane at Thursday, August 26, 2010

You are making me hungry..... Playing "catchup" with your blog and loving the church photos in the previous post!

Did it all get eaten?
Hope the birthday bash was good fun.
You mentioned about me getting used to my new camera the other day. I didn't get used to it! I returned it and our photos from teh day out were taken with my old one!
Lisa x

bet you would have won a first place in the TRELAWNYD FLOWER SHOW......
my quice got second....and I was the ONLY entry
x

Excellent, showing your resourcefulness (such a word?) Anyway I plan to go to my first WI meeting in September!!
We must meet up soon Diane!
love
Lyn
xx

Half the enjoyment of food is how it looks when served, and your offering is beautiful! Some of my best "creations" have come from this kind of necessity! lol

So relieved to hear the quiche tasted ok - you are a very brave woman!