I often think that the Tourist board in Sheffield has its work cut out drawing punters into the city, because its just not a very touristy place. It doesn't have any "attractions". Until recently, it was still very much a city that made its money from heavy industry, and that just wasnt pretty to look at. However, the people of Sheffield are very fond of it (as are we) and I think that it is a city perhaps more for its own. I don't know, perhaps I'm wrong. Have you ever been? What did you find to do here? It has 2 Universities and there is much evidence of a student population which makes it feel like a very young city. We love its very fine theatre's, its lovely parks, its industrial architecture, the many many varied and diverse live music venues. The talent and creativity in the city is astounding - it has a vibrant art scene. It doesn't have the "fine" restaurants with big names attached like you get in Leeds and Manchester, but I like it better for this. It retains a lot of it's individuality. The city centre shopping area is currently in a bit of a crisis as it is in the early stages of mass regeneration that has had to be put on hold because of the economic climate, and it looks a right old mess. But you can still buy what you need at good old "Cole Brothers" (actually John Lewis now, but I don't know anybody that calls it that!!). Anyway, I'm going to be showing you around some of the best bits - here are a few for starters. 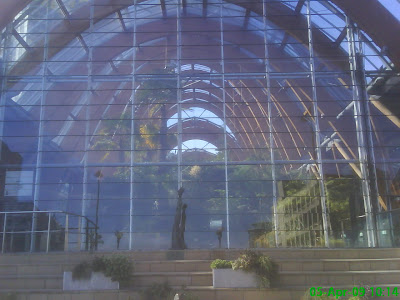 This is the Winter Gardens - it is attached to the Millenium and Ruskin Museum and is very nice, but I struggle to spend more than an hour in here. You would have to read absolutely everything about all the exhibits to make time spin out. The art gallery above the library across the road is far more interesting - However they often have art exhibitions by local artists in the Winter Gardens, and these are brilliant. 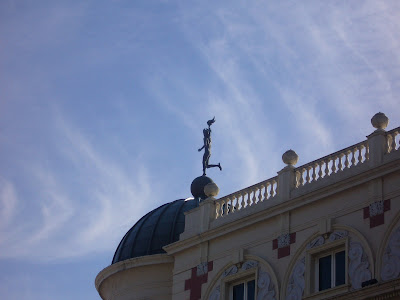 This is the roof of the Lyceum theatre (my daughter took the photo's hence the arty angles!!). The dancing queen and I are regular visitors to the Lyceum. It is an old style theatre and for many years was left derelict. They revamped it in the 80's and restored it to its former glory, and I think it is far nicer than any theatre I have been in in London (the ones in London have all been a bit scruffy). So far this year, we have been to see Evita and Cabaret, and we have tickets for Flashdance and West Side Story which are coming shortly. The Lyceum stands next to the famous Crucible theatre (currently being revamped, but they will have some of it done for the snooker). The style of the Crucible is very modern in contrast to the Lyceum. I think we are really lucky to have these 2 theatres side by side on our doorstep. 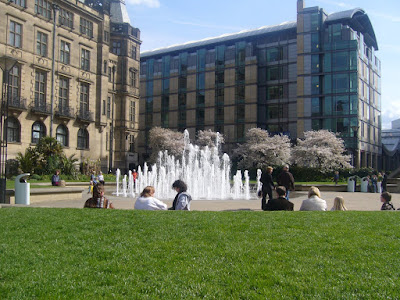 These are part of the Peace Gardens. They stand in the heart of the city next to the old Town Hall (very beautiful building on the left) and in the middle of all the modern offices, hotels and apartments being built. In the olden days, the gardens used to get full of drunks and was'nt a nice place to be, but nowadays they have "City Ambassadors" on guard and it is usually a lovely atmosphere here. I'll take more pictures when I regain control of the camera!!
Posted by Diane at Sunday, April 05, 2009

Hi! Great photos - very arty!!The cherry blossom on the trees looks so pretty. I've only been once and that was about seven years ago to visit a friend we met on holiday years earlier.
Have you got the new LAshley catalogue yet?? If your an LA girl as opposed to CK (I do prefer LA generally too!)you will LOVE the new stuff! Theres a new cranberry wallpaper with big flower print that I really fancy and so much eye candy its at least a 'three cups of tea' read!
BH x

I've never been TO Sheffield, so am looking forward to more of your tour.
G and I saw Cabaret in February. Hope your enjoyment of it wasn't marred by noisy old people!
Lisa

The village I lived in as a child and young adult was on the Mansfield to Sheffield bus route so we would sometimes take the bus to Sheffield for shopping - I'm talking 50s and 60s here - when the 'hole in the ground' underpass was there. I remember the shops as they were and the old playhouse theatre as well. We went to one of the opening performances of the new Crucible theatre, too. We re-visited a couple of years ago when my husband had a job interview and I spent ages walking around I went back to the Graves Art Gallery and into the new Winter garden and gallery and found a new area down near the canal - it had all changed so much.

Hi Diane, i don't think i've been to Sheffield, it looks good. When are you coming to St. Ives? must be quite soon, i think its going to be wet here for most of the week, isn't that typical when the kids sre now on holiday and we have had some lovely weather recently! I am glad you like 'Lucy's house' i have another one on the go now, it is a pink house!! i speak to you soon x noelle x

Sheffield is a great city, did you know that it is called an urban forest due to so many trees growing in it? The city center as you say is a bit of a mess at the moment, but I'm sure it will sort itself out soon enough. I'm proud to be a Sheffield girl.
Rosie